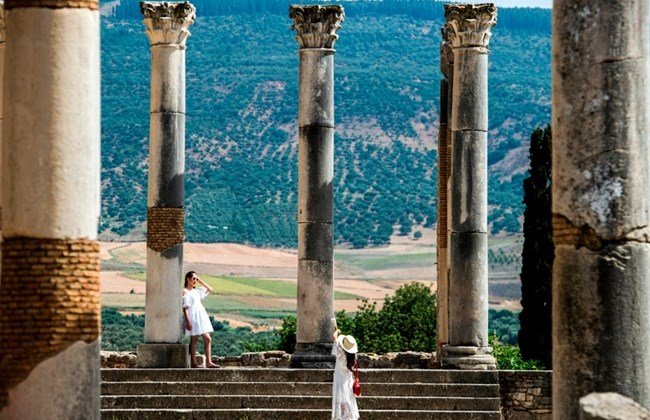 Situated in a fertile plain at the foot of Mount Zerhoun, Morocco, the sprawling remains of Volubilis – the country’s oldest Roman site – have survived pillage and long ages of neglect. After decades of decay, however, custodians of the now closely guarded ancient city have turned the page and are in the process of bringing back the tourists.

Nestled among olive groves near the city of Meknes, the site boasts a new museum and visitor center and has been attracting hundreds of thousands of visitors.

They stroll along the main artery lined with porticoes and the remains of vast mansions, whose mosaic floors testify to a prosperous past.

A triumphal arch, the mainstay of classical Rome’s monumental architecture, sits at the top of what once was the main compound.

Known as “Oualili” in Arabic, the city was named an UNESCO World Heritage site in 1997.

The ancient city has “known several civilizations, from the Mauritanian era to the Romans through the Islamic period,” according to Mohammad Alilou, topographer and assistant conservator of the site.

Volubilis may have been founded as early as the third century B.C. and traces of Phoenician influence at the site date from that period. It was annexed by the Roman Empire in 42 A.D. At its peak, it would have counted up to 15,000 inhabitants.

Threatened by civil wars across the empire, the Roman garrison evacuated the city in 285.

It didn’t regain its splendor until the arrival of Arab conquerors during the seventh century.

In the eighth century, when the Idrisid dynasty erected the city of Fez as its new capital, Volubilis fell once more into disuse. At the end of the 17th century, Sultan Moulay Ismail sent thousands of slaves in order to plunder Volubilis’ marble columns for the construction of his palace in Meknes.

“On the track leading from Volubilis to Meknes, we found capitals [of columns] abandoned by slaves, who fled when they learned that Moulay Ismail was dead,” said Alilou, who has been watching over the site for more than 30 years.

Excavations at Volubilis began in 1915, along with research programs and restoration work.

However, renewed interest in the site brought with it looting, especially during the period of French colonial rule from 1912 to 1956.

One particularly striking case in 1982 made headlines when a marble statue of Bacchus – the Roman god of wine – disappeared. In a desperate bid to find the relic, King Hassan II dispatched gendarmes who “interrogated, abused and beat” peasants who “didn’t know Bacchus from Adam and Eve,” according to Moroccan press reports.

The statue was never found.

“The people here are still traumatized,” a resident of nearby Moulay Idriss Zerhoun said.

Moroccan media frequently warn that the country’s heritage – archeological finds, mosaics and ancient coins – is being looted. In Volubilis, Alilou says that looting is a thing of the past.

Today, “the site is fenced off and well guarded,” he said. “We have a team of 14 guards who work day and night, cameras are everywhere.”

Mustapha Atki, who is another Volubilis conservator, said that the whole issue of looting was “sometimes exaggerated.”

Since the opening of its museum in 2013, the ancient city has attracted several hundred thousand visitors a year.

Alilou believes the ancient city covering 17 hectares has yet to reveal all of its secrets.

“A third of the site,” he had concluded, “especially the western quarter built in the Islamic era, has not been excavated.”