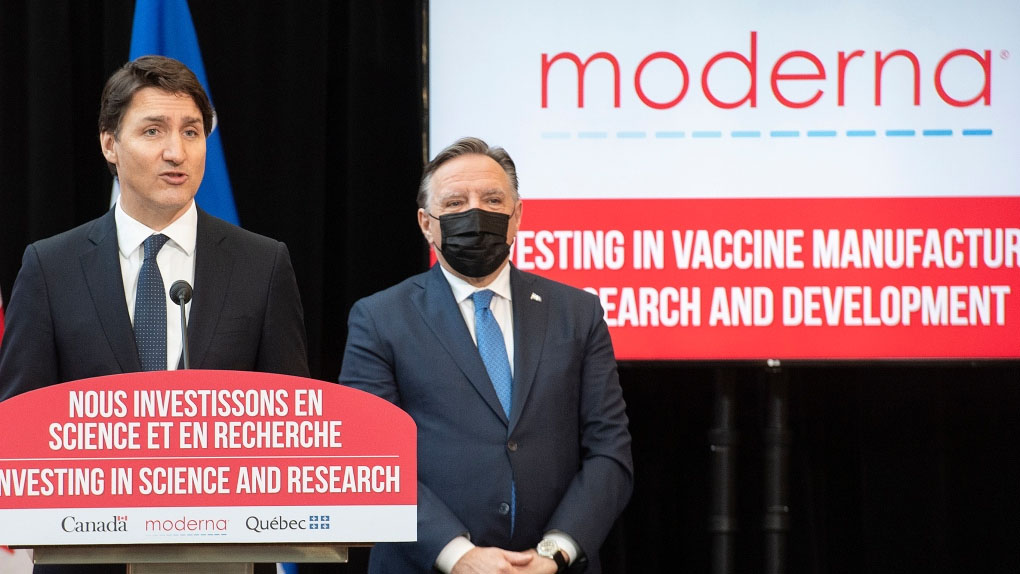 The news leaked a day early, but Canadian leaders and biotech company Moderna officially announced Friday that a new vaccine production facility will be created in Montreal, helping ensure a long-term supply of made-in-Canada vaccines.

“Our government promised to strengthen our capacity” for producing vaccines “here in Canada,” said Prime Minister Justin Trudeau at an announcement at McGill University in Montreal.

Canada has a now-infamous trajectory over the last few decades of building up top-notch vaccine research but dismantling its domestic capacity to actually produce vaccines, leaving it dependent on vaccine facilities in other countries.

The facility, expected to be operational as soon as 2024, will employ 200 to 300 people and will be able to produce up to 100 million COVID-19 vaccine doses per year, Trudeau said.

But it will also ultimately be able to do research and hopefully produce other kinds of vaccines or treatment based on the same mRNA technology, or messenger RNA, that was first used in the COVID-19 vaccines, he said.

“It also will have a significant impact in the research that they’re doing on a range of illnesses. We talked about Alzheimer’s, we talk about cancers, we talk about the range of things that messenger RNA is able to deliver to keep Canadians and people around the world healthy,” said Trudeau.

“And Canada, that has long been leaders in research around mRNA, will now be also leaders in delivering mRNA to Canadians and to the world.”

Moderna’s founder and board chair has deep ties to Montreal, where his family fled after escaping Lebanon’s civil war. He attended Loyola College and McGill before going to M.I.T. in Boston.

Moderna, which was founded in 2010, is still based in Cambridge, Massachusetts.

The company’s CEO, Stéphane Bancel joined Trudeau and Quebec Premier François Legault for the announcement, saying that Moderna’s path over the past two years has been a dramatic one, as it raced to get its mRNA vaccine developed and approved for the first time.

“People forget Moderna was losing money in 2020,” he said. “We didn’t have the financial straps to get this industrial machine going. And Canada was one of only a few, a couple, countries here to help,” by putting in one of the first pre-orders for the vaccine and sending much-needed cash, he said.

Now, with mRNA vaccines tested, approved and widely in use — Moderna and Pfizer both use the technology — for “the first time in the history of medicine, we have an information molecule,” Bancel said.

“And that changes everything. Iit’s like adding a blockbuster to Netflix. It is a change of paradigm.”

Moderna has also signed a collaboration agreement with McGill, allowing it to draw on the university’s scientists while sharing the pharmaceutical’s proprietary information with them.

Quebec is also pinning high hopes on the new facility, but in a slightly different way.

Legault joked about how he and Ontario Premier Doug Ford knew their provinces were both in the running to host the new facility.

“It gives me great pleasure to say that Quebec won the battle,” he said. “It won’t be in Ontario, it’ll be in Quebec, Doug, so a beautiful victory.”

On a more serious note, he said that Quebec has already accumulated many pharmaceutical and biotech companies to set up offices here — 700 companies, he said, employing 36,000 people — and that he hopes the arrival of a giant like Moderna will help crystallize the province’s place as a hub for the field.

“With Moderna, we are adding a major player who will help structure our cluster,” he said.

The provincial minister of economy, Pierre Fitzgibbon, said it took “several months of effort” to convince Moderna to pick Quebec as the spot for the new factory.

Not everyone is celebrating the announcement, however. The nonprofit the Council of Canadians says all Canadians should be pushing back against the government putting its efforts into high-profit, private vaccine production that has helped cut off access to vaccines for millions in less wealthy countries.

The facility may expand vaccine access for Canadians in the future, but “our governments should not be pumping money into companies that have consistently prioritized their own profits at the expense of global public health,” wrote the Council of Canadians in a statement.

“Rather than rolling out the red carpet for private vaccine producers, our leaders should be doing everything they can to increase publicly-owned domestic production capacity,” says Christina Warner, the group’s co-executive director.

The answer to Canada’s hollowed-out domestic capacity is not to invite in major pharma companies like Moderna, argued Warner.

“Private pharmaceutical companies like Moderna have denied millions of people across the globe access to life-saving vaccines throughout the pandemic, thereby bolstering their own profits,” she said.

The group pointed out that of 670 million vaccine doses it produced in 2021, Moderna delivered only two per cent to low-income countries.

Its sales to wealthier countries came with “huge profit margins,” and it also opposed a World Trade Organization proposal to waive intellectual property rights on COVID vaccines and refused to share its mRNA technology with other countries.

ANOTHER VAX FACTORY ALREADY IN THE WORKS IN MONTREAL

This facility won’t be the only one in Montreal. Canada announced much earlier in the pandemic that it would convert the Royalmount vaccine facility — already in use for similar science by the National Research Council — to allow it to mass-produce COVID-19 vaccines.

It wasn’t clear which vaccines the site would produce or whether production had already begun.

Canada struck two deals with vaccine companies related to that facility: Novavax, based in Maryland, and Precision NanoSystems, based in Vancouver.