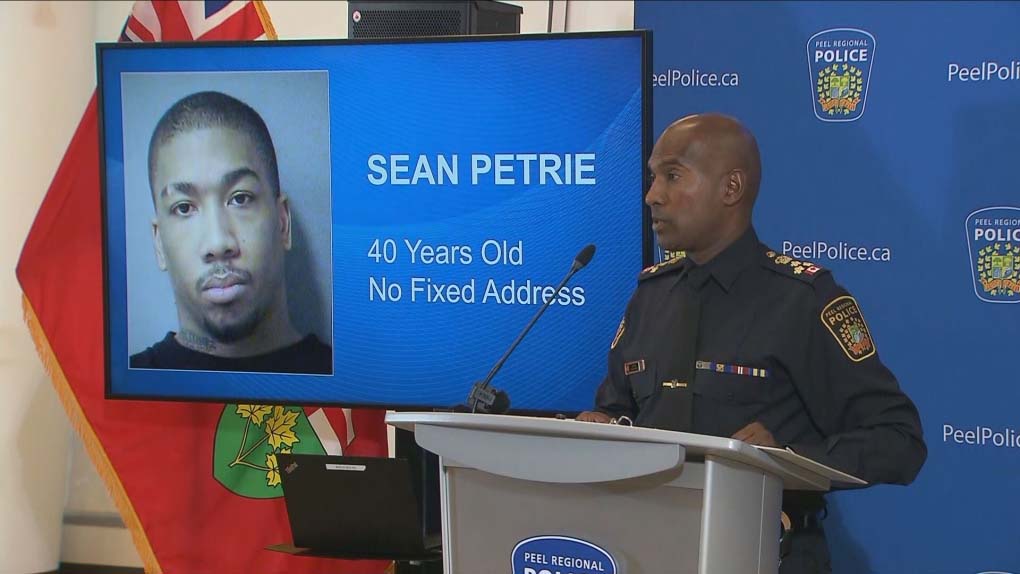 An international exchange student injured in Milton during a shooting rampage that spanned the GTHA on Monday is “not expected to survive,” police say.

Police said Thursday a 28-year-old student who was working part-time at the shop was injured in the shooting and is not expected to live.

“We are not releasing his name at this time out of respect for his family, but we anticipate doing so at a future date and time,” Chief Tanner said. “The third victim, a 43-year-old male, was also an employee of MK auto repairs. He was shot in the leg and has since been released from hospital and is continuing to recover at home.”

Another victim who was shot in Mississauga is in stable condition but suffered life-altering injuries, police said.

During the news conference, police confirmed the gunman’s identity as 40-year-old Sean Petrie, of no fixed address.

Duraiappah said Petrie was known to police and had an “extensive criminal record,” including convictions for assault, armed robbery, carry a concealed weapon, and possession of a loaded prohibited or restricted firearm.

In March 2007, Petrie was placed on the national flagging system after being deemed a “high-risk” to reoffend for an offence that occurred in 2005.

Petrie’s last conviction was in 2015 for a criminal driving offence, according to police.

“I can also say that investigators have interviewed known family of Mr. Petrie and learned he was estranged from them, and depending on which family member that they had spoken to, for a period of one to over five years,” Duraiappah said.

Police released a photo of Petrie along with a picture of the red Corolla he was driving when he arrived at Tim Hortons.

“Investigators also learned that prior to the start of this tragedy Sean Petrie drove to the location of where Constable Hong was murdered in a red Toyota Corolla where he parked the vehicle in an adjacent lot to the coffee shop. The car had an Ontario license plate of CXMM 077,” Duraiappah said.

Police are asking anyone with information about Petrie, the incident or activities leading up to it to contact them at 905-453-2121, extension 3205, or Crime Stoppers anonymously.

On Monday, at around 2:15 p.m., Peel police officers responded to a shooting at a Tim Hortons on Argentia Road, near Winston Churchill Boulevard, in Mississauga.

Hong was in Mississauga instructing a motorcycle training course sponsored by Peel police, and was grabbing coffee for his colleagues while on his lunch break at the time of the shooting.

“The first officers who responded were a combination of constable Hong’s colleagues who were training with him at the time, as well as other subsequent responding officers from Peel Regional Police,” Duraiappah said.

The 48-year-old worked for the Toronto police force for the past 22 years and is survived by his wife, two teenage children and parents.

Police revealed Thursday, the gunman arrived at the coffee shop two hours and 15 minutes prior to shooting Hong.

After Hong was killed, the suspect immediately left the scene and fled across the road to an adjacent parking lot where he shot and carjacked another victim.
Less than an hour later, Halton police said the suspect drove to MK Auto Body Repairs in Milton and proceeded to shoot three people.

The shop owner, Ashraf, was pronounced dead at the scene. The 38-year-old was a husband and father of two young girls

Police said the suspect then fled the scene but was located shortly after at a cemetery in Hamilton.

“At that time, an altercation took place between the suspect, Sean Petrie, and members of both the Hamilton and Halton police services. As a result, the suspect was pronounced deceased at the scene,” Tanner said.

The Special Investigations Unit is investigating the incident.

A funeral for Ashraf was held in Mississauga on Wednesday and a funeral service for Hong is currently being planned.