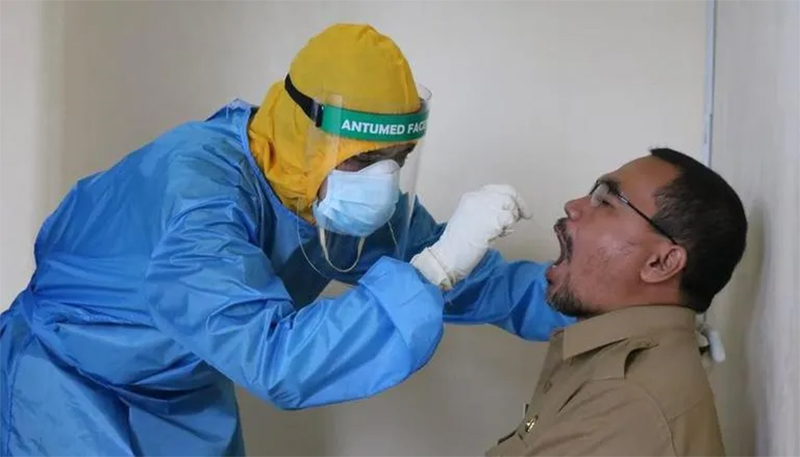 WELLINGTON, NEW ZEALAND – Micronesia’s first outbreak of COVID-19 grew in one week to more than 1,000 cases by Tuesday, causing alarm in the Pacific island nation.

Last week, Micronesia likely became the final nation in the world with a population of more than 100,000 to experience an outbreak of the disease, after avoiding it for 2 1/2 years thanks to its geographic isolation and border controls.

Health officials said cases were rapidly increasing. It reported 140 new cases Monday, bringing the total to 1,261, a figure which includes some cases caught at the border before the outbreak.

Eight people have been hospitalized and one older man has died, officials said.

Many top lawmakers and senior officials have caught the disease, including Vice President Yosiwo George, who has been hospitalized, officials said. They said the vice president’s condition was improving.

Camille Movick, whose family owns Fusion Restaurant in Pohnpei State, told The Associated Press that a lot of people have been posting on Facebook asking, for instance, that others stay away from their homes.

“Initially there was quite a bit of panic and worry with most people,” she said.

She said her restaurant remained open although business was slow because many people were afraid to dine in. She said some other restaurants had closed their dining rooms and were only offering takeaway services.

Movick said authorities had issued a directive that all people must wear masks in public — even outdoors — and that they faced fines of US$1,000 for noncompliance.

She said one positive outcome was the outbreak had prompted many previously unvaccinated people to get their shots.

She said many people suspected the virus might have been circulating before the first community case was confirmed last week because health authorities weren’t routinely testing patients for the disease.

Last year, Micronesia became one of the few countries to impose a broad mandate requiring all eligible citizens get vaccinated against the coronavirus.

The government threatened to withhold federal funds from any individuals or business owners who didn’t follow the rules. Health officials said this week that 75 per cent of people aged 5 and over were fully vaccinated.

Movick said many parts of society were continuing to function as before, including many people who were working from their offices.

“We’re hoping things get back to normal soon,” Movick said. “Just like in other countries, over time, they’ve gotten over it, and lifted the restrictions.”