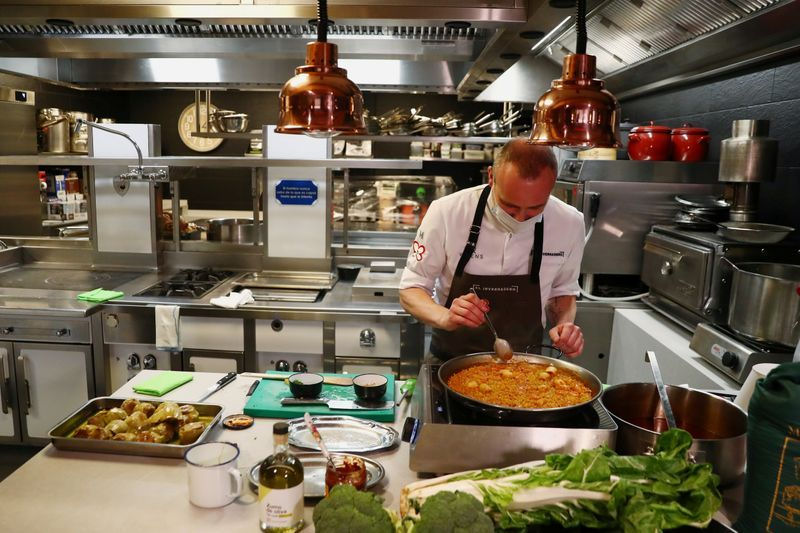 Chef Rodrigo de la Calle’s Michelin-starred El Invernadero is one of the top restaurants in Calle Ponzano, a stretch of more than 70 bars, eateries and tapas joints near Madrid’s business district that is normally packed with young professionals carousing after work.

That was until the coronavirus epidemic hit Spain. The shutters have stayed down all along the street since Spain entered a lockdown on March 14.

De la Calle closed his restaurant, which normally serves only about 16 diners at a sitting with a menu based on high quality vegetables, a few days before the government imposed a state of emergency.

He had already had a similar experience in his two restaurants in Beijing, China. Even so, he could not imagine how far the situation would go in Spain, one of the countries most hit by the coronavirus with more than 25,000 deaths.

Faced with the gloomy prospects for tourism, De la Calle, 43, has decided to reinvent himself and is starting a takeaway and delivery service. He is also waiting for government permission to offer a cooking service in customers’ homes.

“In the restaurant we have 30-40% of foreign customers for tourism and business and in the San Miguel Market they are 80% foreign, so we have some reluctance to open,” he said.

“The idea is not to turn a Michelin restaurant into a delivery. The idea is to survive until we can recover that normality,” added the chef, a farmer’s son who won his first Michelin Star in 2010.

It is not the first time De la Calle has had to reinvent himself. His first restaurant went bankrupt in 2013, a victim of the financial crisis, and he again went bust on a new project in 2014.

“I have a lot of experience in this kind of crisis unfortunately or fortunately,” he said.

“It is very important to have attitude, a smile, ask for help from whomever you have to. But the most important thing is to do something for the society and not to be left thinking that the society has to do it for you.”, he said, a smile hiding behind his protective mask.

De la Calle’s 26 employees in Spain are on furlough and he will take care of the whole business by himself, from cleaning vegetables to serving and packing orders through two websites named Verdelivery and Paella Corner.

He expected to handle 300 portions between lunch and dinner per day.

“We will be the fine dining of the delivery, and we will be pioneers in giving high quality vegetables take away and there will be versions of dishes from my (Michelin) menu, like the caramelized artichokes.”

His idea is to bring back his employees progressively and to move on to the second phase of the plan, which is to cook at his clients’ homes even as the lockdown loosens.

“People won’t want to go out and we want to get ahead of that situation,” he said.