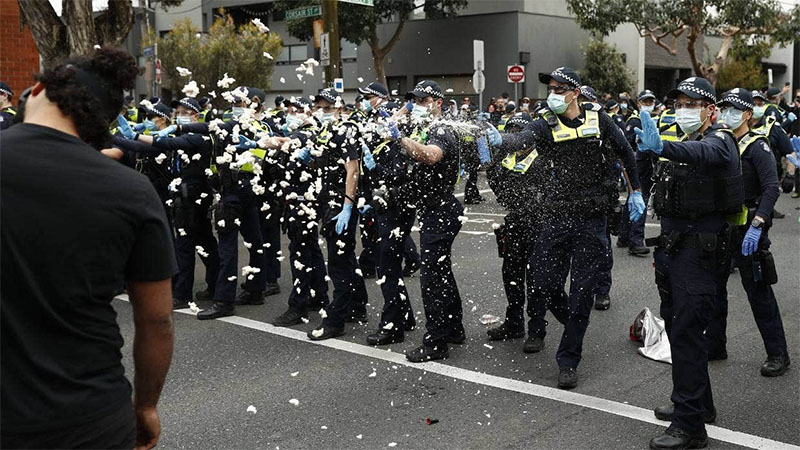 Australian police have made several arrests and used capsicum spray (Pepper Spray) on groups of anti-lockdown protesters protesters who charged through police lines in Richmond this afternoon.

Travel in and out of Melbourne by public transport and car has ground to a halt to prevent the anti-lockdown protest from starting, however it did not thwart the rally completely.

Police set up checkpoints on roads into the city to stop people from travelling into Melbourne without a reason ahead of the rally that was originally planned for 12pm (local time) on Saturday.

Protesters changed the location to Richmond and began gathering at about midday outside the Richmond Town Hall on Bridge Road.

Hundreds marched in the middle of the road chanting “no more lockdown” and “sack Dan Andrews”. Most were not wearing masks.

The protesters walked up Bridge Rd and then turned down Burnley St, where the rally stopped and protesters sat in the middle of the street shouting “you serve us” at police.

Protesters break through the police line, an officer gets assaulted and trampled by demonstrators, people are screaming and covered in capsicum spray @theage pic.twitter.com/qXX9lIAZRJ

Police used capsicum spray to subdue some protesters, who were closed in on both sides by officers carrying batons.

Another group of protesters later arrived and sandwiched police at one end of the demonstration.

The protesters then broke off through a gate of an apartment complex to evade police, causing traffic chaos in Richmond’s side streets.

They then walked back to Bridge Rd before moving up Church St in Hawthorn and then back down to Barkers Rd to avoid police. Police surrounded protesters again in a gorge on Victoria St and used capsicum spray to turn them back.

Protesters managed to surge through the police line, screaming and soaked in capsicum spray as they went.

At least one officer was knocked over and trampled in the bedlam.

“God gave free will and freedom of choice, it’s not for government to take it,” one protester yelled from the crowd.

“The mental health toll is too great,” said another.

The protest continued in diminishing numbers in Melbourne’s inner east after winding through streets for up to 10 kilometres.

A group of around 200 protesters again congregated near the corner of Bridge Road and Church Street about 2.30pm (local time), with police blocking both sides of the major thoroughfare, before the protesters dispersed shortly after.

More than 2000 officers have been deployed as part of the anti-protest operation, with senior police stating they will do everything they can to prevent access to the city.

Police made two hundred arrests at the last anti-lockdown rally on August 21 after more than 4000 people descended on the city.

“This is the biggest game in town for us, to stop this occurring,” Patton said. “There’s nothing more important than what we’re about to embark on this weekend to stop this protest.

“We’ll do everything we can to prevent access to the city.”

Patton also revealed that the longer restrictions go on the more likely it was that people would be fined. He said the longer and heavier the lockdown the greater the temptation was for people to break the rules.

Access to the CBD will only be granted to those travelling for essential work, healthcare or to attend a vaccination appointment.

Earlier in the day cars were banked up for over 100 metres outside the Women’s Hospital on Flemington Road as authorities closely checked the permit and ID of every car trying to get into the CBD.

Rally instructions, sent around on an encrypted messaging service, asked protesters to move in smaller groups of 10 to 20 before meeting up near the final location to hold the demonstration.

On Friday, construction workers brought traffic around Melbourne to a standstill with a demonstration smoko after being told they would no longer be able to use tea rooms.