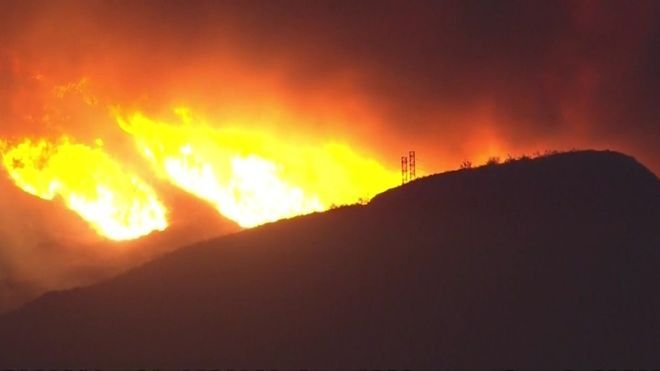 Thousands of people have been forced to flee their homes north of Los Angeles as a fast-moving wildfire rips through the area.

The blaze took hold in the early evening in southern California’s Ventura County and burned 10,000 acres (4,000 hectares) within a few hours.

Now it is threatening the cities of Santa Paula and Ventura, officials say.

One person was reported to have died in a road accident while trying to flee the fire.

Two buildings have been destroyed and thousands of homes are without power, according to reports.

“All that firefighters can do when we have winds like this is get out ahead, evacuate people, and protect structures.”

The fire is believed to have broken out close to Thomas Aquinas College in Santa Paula, some 50 miles (80km) north of Los Angeles, early on Monday evening.

The college said that all its 350 students and staff had been evacuated.

Fanned by gusts of up to 70mph (115 kph) the fire quickly spread, forcing the evacuation of at least 1,000 households across Ventura County.

Evacuation centres have been opened in schools and fairgrounds.

Hundreds of firefighters were working through the night to try to prevent the fire from reaching Santa Paula and Ventura cities.

At least 13 people were killed when fires ripped through parts of northern California’s wine region in October. Some 2,000 structures were destroyed.

Related Topics:California wildfireU.SVentura County
Up Next