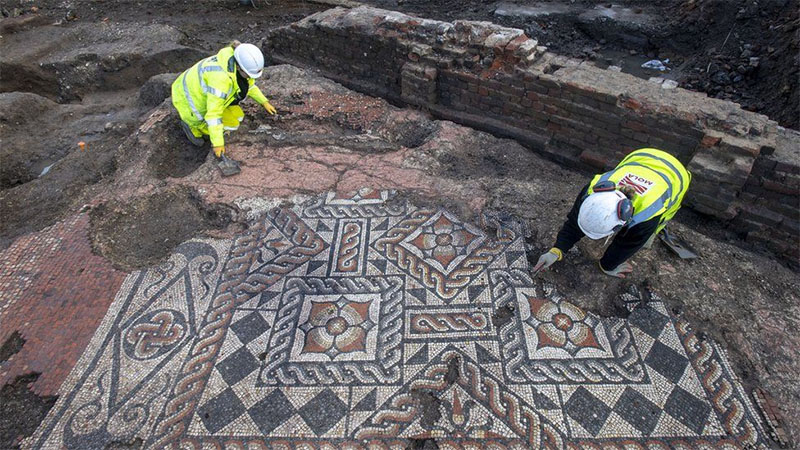 A large area of well-preserved Roman mosaic — parts of it approximately 1,800 years old — has been uncovered in London near one of the city’s most popular landmarks.

The mosaic is thought to have adorned the floors of a Roman dining room, and the spot where it stands is near the Shard — the capital’s tallest building, close to London Bridge.

Archaeologists from the Museum of London Archaeology (MOLA) unearthed the mosaic earlier this month during an excavation ahead of building work due to take place on the site, which previously served as a car park.

The find is the largest area of Roman mosaic to have been discovered in London in at least 50 years, according to a press release from MOLA.

“It is a really, really special find,” Sophie Jackson, MOLA’s director of developer services, told CNN Wednesday, adding that large Roman mosaics were not often built in London due to it being a “crowded” city.

“It is just incredible that it’s survived,” Jackson said.

“To actually to have a whole big spread of mosaic like that in a definable room — we think it’s a dining room — is really amazing. And it looks really nice as well, it’s just really pretty, actually.”

The dining room where the mosaic was found is thought to have been part of a Roman “mansio,” or “upmarket ‘motel’ offering accommodation, stabling, and dining facilities,” the team said in the press release. The lavish decorations and size indicated only “high-ranking officers and their guests” would have stayed there.

The mosaic itself is comprised of two panels, with the larger dating to the late 2nd or early 3rd century AD. However, the team spotted traces of an earlier mosaic underneath, which Jackson said an expert will now attempt to retrace and reconstruct.

The larger panel is decorated with “large, colouful flowers surrounded by bands of intertwining strands” and patterns including a Solomon’s knot (a looped motif). The smaller one has two Solomon’s knots and “stylized flowers,” the press release added.

As there is an “exact parallel” to this design in a mosaic found in the German city of Trier, the team believes the same artists worked on both, suggesting a tradition of “travelling Roman artisans at work in London.”

Describing the placement of the mosaic, Jackson said: “The people — probably men in this case — would be lying on the couches, leaning on their left shoulders, eating, being fed food, and looking south into the bigger room, sort of admiring the mosaic.”

Near the spot where the mosaic was found, the team also found traces of “lavishly” painted walls, terrazzo-style and mosaic floors, coins, jewelry and decorated bone hairpins, suggesting the area was occupied by wealthy inhabitants.

Although the mosaic’s future is not yet decided, Jackson said it will likely go on public display. The archaeologists will now proceed to the final stage of the excavation, at a spot that has not previously been examined.