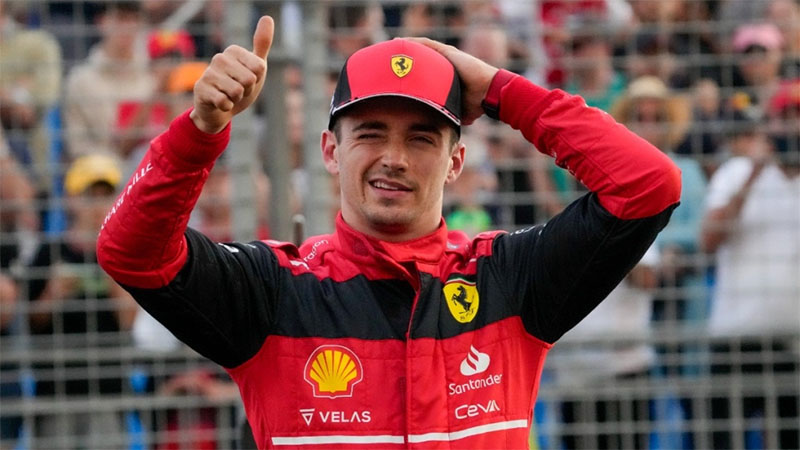 MELBOURNE, AUSTRALIA – A Ferrari versus Red Bull battle is shaping up as the likely scenario on Sunday at the first Australian Grand Prix since the pandemic began in 2020.

Charles Leclerc claimed Ferrari’s first pole position at the revamped Albert Park circuit since 2007 with a decisive final lap of 1 minute, 17.868 seconds in Melbourne on Saturday.

But running close behind were the Red Bulls of world champion Max Verstappen, who qualified .286 seconds behind, and Sergio Perez, who posted the third quickest time.

Leclerc and Verstappen have shared the opening two races of the season in Bahrain and Saudi Arabia and will now start alongside each other on the front row.

Aston Martin endured a difficult session when both Sebastian Vettel, who qualified 18th, and Montreal’s Lance Stroll crashed into walls.

Stroll was also involved in a collision in the opening qualifying session with Williams driver Nicholas Latifi of Montreal. Latifi and Stroll will start at the back of the grid 19th and 20th respectively.

Leclerc, whose teammate Carlos Sainz qualified ninth, said he had never felt entirely comfortable on the circuit in previous visits.

This continued through practice sessions on Friday and Saturday. But in front of a record Saturday crowd of 123,247, he gambled by asking his Ferrari for more in what was a dashing last lap as he took his second pole position of the season and the 11th of his career.

“It was a good lap. This time I took quite a big risk, especially on Turn 6, which was quite tricky,” Leclerc said. “I am very happy with the lap, especially on a track like this where I have always struggled in the past, and also through practices, even though we were competitive.”

However, neither Leclerc nor Verstappen expressed great confidence after qualifying, with the Ferrari driver predicting a tight race.

“I think we are very close with Red Bull. It is going to be close tomorrow,” Leclerc said.

Verstappen set the challenge for Leclerc late in Q3. But he was far from happy with the way his Red Bull had performed, saying it was a struggle.

“It has been terrible for me the whole weekend. It is just not a good balance,” he said. “I have spent the whole weekend chasing something and I never felt comfortable for one lap, except the long runs.”

The closest challenger to McLaren and Red Bull was McLaren’s Lando Norris, .835 seconds slower than Leclerc.

In qualifying fifth, .957 seconds behind Leclerc, Lewis Hamilton’s streak of six straight pole positions in the Australian Grand Prix is over.

“I think we have extracted the most from the car today. That is a positive. I am naturally also gutted I wasn’t able to extract a little more,” Hamilton said.

Double world champion Fernando Alonso looked set to challenge for pole position in his Alpine. But the 40-year-old Spanish driver lost control on Turn 11 and crashed, drawing a red flag with just under seven minutes remaining in Q3.

“I was probably doing my best weekend for years, probably fighting for pole position,” Alonso said.

At the end of the first qualifying session, Latifi pulled off to let Stroll pass before accelerating to re-pass Stroll on the run to the sixth turn. Stroll appeared not to see his countryman and in shifting over, made contact with Latifi.

“For me, it’s quite clear. I’ve just seen the video,” Latifi said on the F1 website. “I just tried to go off-line to prepare my out-lap and it seemed like he just turned into me once I was alongside him.

“I let him through because he was pushing to open a lap, or so I was told, then I saw he aborted the lap, so I wanted to get carried on with my own preparation lap, so I went back by him. Obviously it was a big gap and once I kind of got past him, for whatever reason he decided to turn.”

Race stewards handed Stroll a three-place grid drop as well as two penalty points after concluding Stroll to be “predominantly to blame for the collision because of his lack of situational awareness of (Latifi’s) passing manoeuvre.”

“It’s a shame that we had a terrible day,” Stroll told F1. “It was a very awkward situation, what happened on that cool-down lap. Nicholas let me go and then the track falls to the right there and as he accelerated. The timing was just really bad I guess. That’s what caused the collision.”

In a major renovation to the track, five corners were reprofiled and two were removed completely.

After two races, Leclerc leads the championship with 45 points, followed by Sainz on 33 and Verstappen with 25.

F1 racing underway in Saudi Arabia day after nearby attack

Sacheen Littlefeather, who declined Oscar on Brando’s behalf, dies at 75