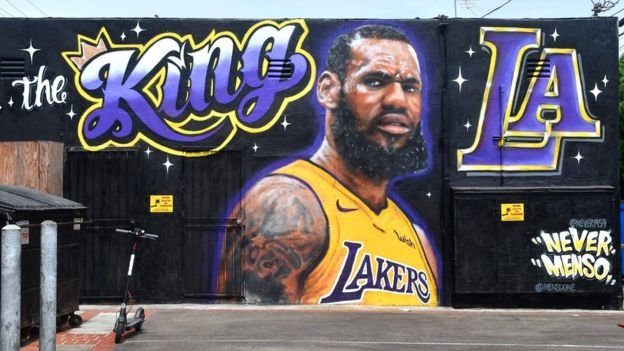 US basketball star LeBron James says he regrets naming his son LeBron James Jr because of the pressure it places on him to reach the same level of success.

“I still regret giving my 14-year-old my name,” he said in the first episode of his new HBO TV series, The Shop.

The clip, which was filmed in Los Angeles, is due to air in August.

James, 33, moved to LA earlier this month after signing a four-year deal with the LA Lakers basketball team worth $154m.

In footage from James’s new show which was shared on social media, US comedian Jon Stewart asks the sports star about his family and how he reassures his children, especially LeBron James Jr – better known as Bronny – over expectations to live up to his success.

“They’re playing the same sport that you play better than anyone else in the world… how do you give them peace of mind that they don’t have to be you?” Stewart asks.

“When I was younger, I didn’t have a dad, so my whole thing was whenever I have a kid, I’m going to do everything that this man didn’t do,” James says, adding: “It’s up to them to take their own course, whenever that time comes.”

Former player and basketball great Magic Johnson has called James the “best player in the world”.

CAS confirm 2 Russians to be stripped of 2008 Olympic medals