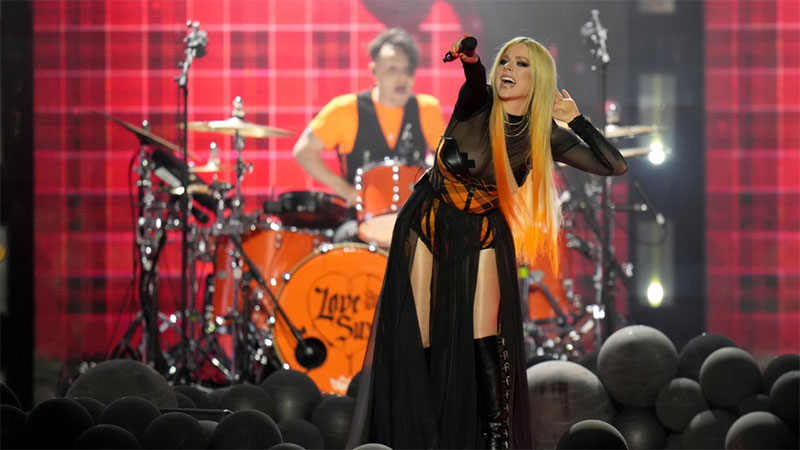 TORONTO – Nothing was complicated when it came to showing appreciation for Avril Lavigne at this year’s Juno Awards.

After Canada’s biggest night in music pivoted to a virtual ceremony for the past two years, the celebration welcomed back its live audience with open arms and plenty of love for Canada’s pop princess from Napanee, Ont.

Lavigne performed a medley of her biggest hits, including “Complicated,” “Girlfriend,” “Sk8er Boi” and “I’m With You,” before returning to hand Shawn Mendes the TikTok fan choice award.

Even Junos host Simu Liu paid tribute to Lavigne by singing a very off-key acoustic rendition of “Complicated” to a very supportive reception from the audience.

‘I should’ve started on a lower key,” Liu wailed as the performance intentionally went off the rails.

It was one of many moments of showmanship from the “Shang-Chi” star who opened the Junos with a nod to his Marvel persona before he launched into his own version of Molson’s famous “I Am Canadian” pledge.

“I grew up on ketchup chips, roti and Jamaican beef patties,” he told the crowd at Toronto’s Budweiser Stage.

Liu also used the bit as an opportunity to get a little more political, reciting: “Canada is a place where the government is also our drug dealer; and we’re into snowboarding not waterboarding; and where a woman always has the right to choose.”

Other Canadian stars got their moments too, including Montreal singer-songwriter Charlotte Cardin, who emerged the biggest winner of the year with a total of four trophies.

She picked up album of year for “Phoenix” on the broadcast after the project won pop album of the year at an industry event on Saturday. She was also named artist of the year and earned single of the year for “Meaningless” at the pre-telecast event.

“A year ago I would’ve not believed you for one second if you told me I’d won four Junos,” Cardin said after the show.

Mendes also pocketed a special international achievement award for his global impact on music, which he accepted with a reflection on his stratospheric rise to success.

“When I was younger I used to think … if I could write just one big hit song people would like me and that I would be enough,” he said.

“We’re taught to believe that what we achieve is the same thing as what we are worth. But something that I know to be true now is that I was enough before anybody knew my name.”

Other winners included Hamilton rock act Arkells for group of the year, and Haviah Mighty who became the first woman to receive the rap album or EP of the year for “Stock Exchange.”

“This one is for women in hip hop,” she said.

Vancouver pop singer Jessia won breakthrough artist partly on the breakout success of her single “I’m Not Pretty” on TikTok.

“Thank you so much,” she said as tearfully waved the Juno in the air. “This is such a dream come true.”

Deborah Cox was inducted into the Canadian Music Hall of Fame by former Toronto Raptors player Chris Bosh, who told the crowd how her hit “Nobody’s Supposed to Be Here” left a lasting impression on him.

Then, he introduced a video of congratulations from Cox’s contemporaries, including John Legend, Melanie Fiona, and record executive Clive Davis who first signed her.

Cox took the stage in a sleek, golden gown with a thigh-high slit to reflect on three decades in the music industry.

“Growing up as a Black girl in Toronto, Canada, this vision seemed intangible,” she said as she accepted the honour.

“It wasn’t easy to leave my home but it was necessary. Otherwise, I’m not sure that I’d be standing here this evening. Those rejections became my redirection and only added fuel to my fire.”

Even before the Junos got underway, many of this year’s nominees were already talking about the Avril Lavigne of it all.

Toronto rock act the Beaches, who have repeatedly professed their obsession with Lavigne, finally got a chance to meet their idol when they crossed paths on the red carpet.

“We were all six and eight years old (when) her first album came out. It was monumentally important for us to see a cool woman playing incredible rock music,” said lead singer and bassist Jordan Miller, whose band won rock album of the year on Saturday.

“For her to be a local Canadian girl, it (meant) we can do what she does, and she’s one of the reasons why we’re here tonight.”