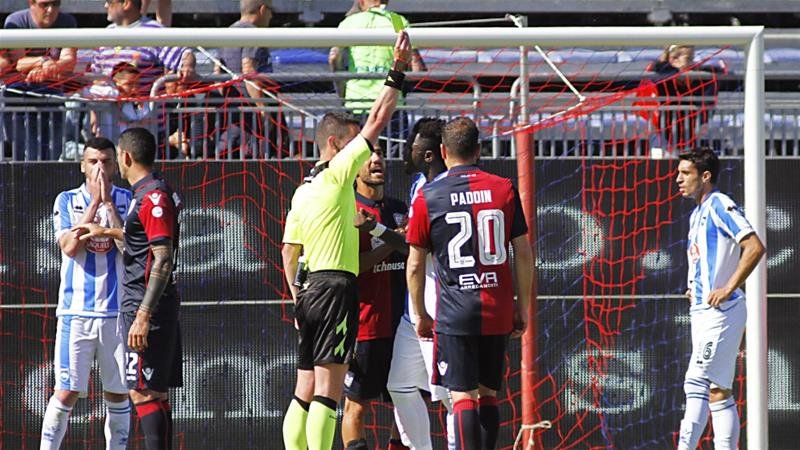 The Italian football federation has rescinded Pescara midfielder Sulley Muntari’s one-match ban for walking off the field in response to racist chants by spectators during a Serie A game against Cagliari.

The Ghanaian’s two yellow cards that amounted to a red Sunday’s match was annulled by the federation’s appeal court on Friday following protests.

The first yellow card was issued for protesting about the abuse and the second for leaving the field without following procedures.

Cagliari was not penalised as the league ruled that the racist chanting came from “about 10 people, or less than one percent of the sector” of the stadium.

Britain’s Kick It Out anti-discrimination group had called Italy’s football authorities “gutless” over the ban.

“The gutless failure to not take action by the Italian authorities should not be allowed to pass,” Kick It Out said in a statement on Wednesday.

“It’s unbelievable that Cagliari escaped punishment as ‘only 10’ fans were involved. This situation should never be allowed to happen again.”

Former Tottenham Hotspur striker Garth Crooks, an independent trustee at the organisation, urged black players in Italy to go on strike this weekend unless the ban was withdrawn, the campaign group said in a statement.

Italy and other countries have struggled to stamp out racist chants at games. In 2013, the AC Milan team left the pitch during a friendly in the town of Busto Arsizio after home fans insulted midfielder Kevin-Prince Boateng, another Ghanaian.

Under guidelines introduced following that incident, the referee is supposed to alert the fourth official who should in turn contact authorities policing games.