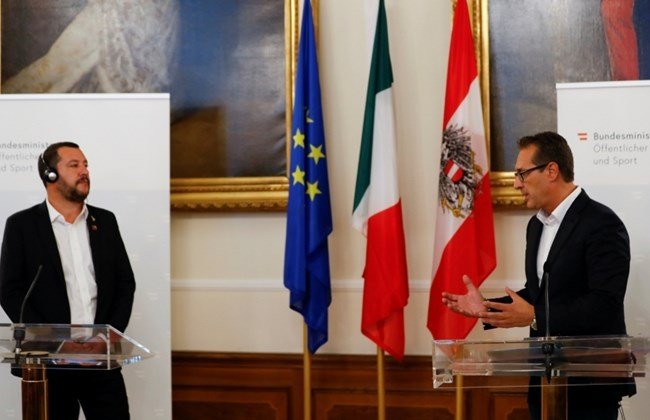 Italian Deputy Prime Minister Matteo Salvini denied Friday having reached a deal with Germany to take back migrants who had already applied for asylum in Italy, saying he wanted more concessions from Berlin.

German Interior Minister Horst Seehofer announced Thursday he had secured an accord with Italy over the issue on the back of similar deals with Greece and Spain.

Earlier this year Chancellor Angela Merkel’s government almost collapsed because of a row over migration and border controls. Ever since, it has pressed southern EU states to take back asylum seekers previously registered in these countries.

Seehofer told the German parliament Thursday that he expected to sign the Italian deal shortly, but Salvini cautioned on Friday that he wasn’t ready to put his name to the accord.

“My signature is still not there because I’m waiting for further clarification,” Salvini said following a conference on migration and security hosted by Austria in Vienna.

However, the Italian minister told reporters he had received reassurances on some key points, including a pledge that for every migrant Germany returned to Italy, the German authorities would accept a bonafide asylum seeker from Italy.

“There must be a zero balance,” said Salvini.

But he said he wanted “to see the availability and openness” of Germany on two other issues – a revision of both the EU’s Dublin Treaty on how Europe handles asylum requests, and of the EU’s Sophia naval mission which is patrolling the Mediterranean.

Italy is seeking an overhaul of the Dublin Treaty so that there is an automatic distribution of asylum seekers throughout the EU, instead of requiring them to stay in the country where they first touch European soil, as is the case now.

It also wants to change the mandate of Operation Sophia, which at present says that all migrants picked up in the Mediterranean must be taken to Italy.

Italy has become the main route into Europe for hundreds of thousands of asylum seekers arriving by sea since the other main route from Turkey to Greece was largely shut in 2016. However numbers have fallen dramatically over the past 12 months.

Salvini said that since June Germany had picked up “no more than 200” migrants who had initially registered in Italy.

“So, in a nutshell, I will sign a deal for the possible readmission of these 200 people provided that 200 other immigrants leave Italy and go to Germany,” Salvini said.

He added that the mooted accord would provisionally run until November “to see if it is useful.”