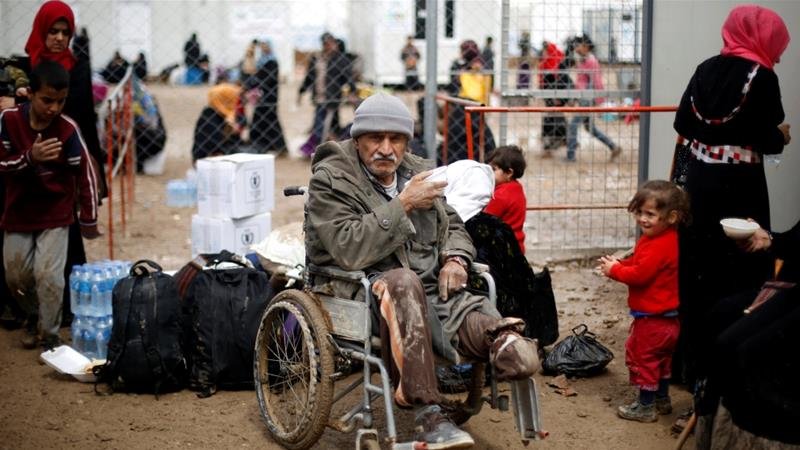 Iraqi forces have gained ground in door-to-door fighting in the Old City of Mosul, a military spokesman said, as the US-backed offensive to capture ISIL’s de facto capital in the country entered its seventh month.

Drones are being used to locate and direct air strikes on the group, which is dug in among civilians, he said.

Troops have had the centuries-old al-Nuri Mosque in their sights for weeks, as capturing it would mark a symbolic victory over Islamic State of Iraq and the Levant.

It was from the mosque that ISIL leader Abu Bakr al-Baghdadi declared a caliphate in July 2014 after the group swiftly seized large areas of Iraq and Syria.

A police spokesman said the troops were closing in on the mosque without indicating the remaining distance.

Progress has been slow as about 400,000 civilians, or one-quarter of Mosul’s pre-war population, are trapped in the Old City, according to the United Nations.

As many as half a million people are estimated to remain overall in neighbourhoods still under control of ISIL in western Mosul, the UN said in a statement on Monday.

“They are being shot at, there are artillery barrages, families are running out of supplies, medicines are scarce and water is cut-off.”

The war between ISIL and Iraqi forces is taking a heavy toll on several hundred thousand civilians trapped inside the city, with severely malnourished babies reaching hospitals in government-held areas.

“Mosul has pushed us to our operational limits,” Grande said.

At least 493,000 people have fled Mosul, leaving almost everything behind, she added.

Government forces, including army and police, have taken back most of it, including the half that lies east of the Tigris River.

ISIL is now surrounded in the northwestern quarter, including the historic Old City, using booby-traps and sniper-and-mortar fire against security forces.

Police on Sunday reported a toxic gas attack on its troops that caused no deaths. It also said ISIL was increasingly using suicide attackers on motorbikes.

The narrow alleyways restricts the use of suicide car bombers by the group and tanks, armoured personnel carriers, and Humvees by the government forces.

Fighting has killed several thousand among civilians and fighters on both sides, according to aid organisations.

Residents who managed to escape from the Old City say there is almost nothing to eat but flour mixed with water and boiled wheat grain.

What little food remains is too expensive for most to afford, or is seized by ISIL members and their supporters.