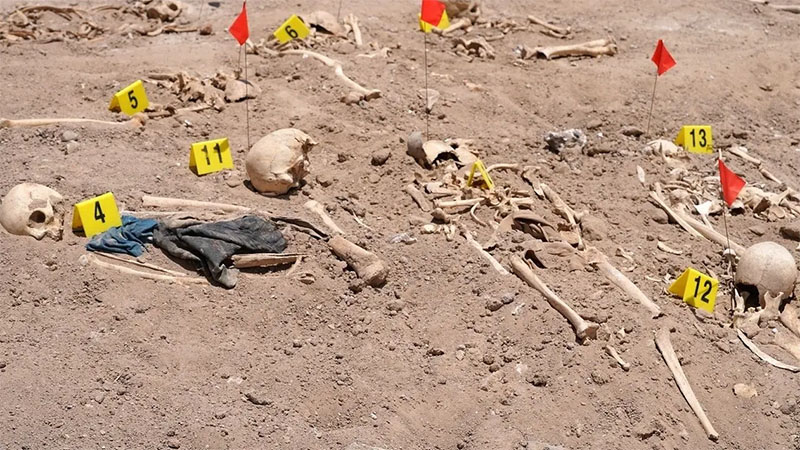 The mass grave was first discovered in April near the southern city of Najaf, during work to build a residential compound.

It is believed to date back to the 1990s, when Saddam unleashed a deadly campaign against members of the majority Shia Muslim community in southern Iraq that left nearly 100,000 dead.

“There could be 100 victims in this grave. It is an estimation, the number could be higher due to the large size of the area,” said Abdul Ilah al-Naeli, who heads a government foundation tasked with finding mass graves and identifying the remains.

Calling the burial “the scene of the crime,” Naeli said the mass grave dates back to the “1991 popular (Shia) uprising” against Saddam.

An AFP correspondent saw skulls and other human remains near the construction site where cement buildings have been erected.

According to Iraqi authorities, Saddam’s regime forcibly disappeared more than one million people – including from the Kurdish minority – in the 1980s and 1990s, and many of their families are still trying to ascertain what happened to them.

Iraq pays tribute to the missing on May 16, which is known in the war-wracked country as the National Day of Mass Graves.

Saddam was toppled in the US-led invasion of Iraq in 2003 and executed in December 2006 after being convicted by an Iraqi court of crimes against humanity.

The oil-rich country has been hit by waves of conflict in subsequent decades, culminating in the fight against ISIS terrorist group, which ended in 2017.

ISIS alone left behind an estimated 200 mass graves that could hold up to 12,000 bodies, the United Nations has said.

Authorities in Iraq are frequently announcing the discovery of mass graves, the latest in March when the remains of 85 ISIS fighters and their relatives were exhumed in the northern city of Mosul.

Saudi Arabia, US strengthen cooperation in technology, space as part of Vision 2030