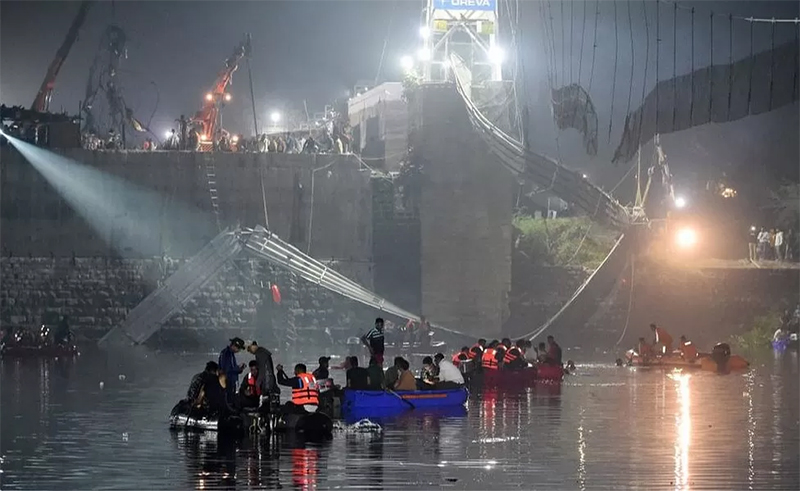 At least 141 people died when a pedestrian suspension bridge collapsed in India’s western state of Gujarat.

A local official said most of those who had died were women, children or elderly. The bridge in Morbi had been reopened just a week ago after repairs.

There was overcrowding on the bridge at the time as people celebrated the Diwali festival, officials said.

The 230m (754ft) bridge on the Machchu river was built during British rule in the 19th Century.

The death toll is expected to rise further.

Police, military and disaster response teams were deployed and the rescue effort is continuing.

More than 177 people have been rescued so far, officials said.

“Many children were enjoying holidays for Diwali and they came here as tourists,” an eyewitness called Sukram told Reuters news agency.

“All of them fell one on top of another. The bridge collapsed due to overloading.”

Videos on social media showed dozens clinging onto the wreckage as emergency teams attempted to rescue them. Some survivors clambered up the bridge’s broken netting, and others managed to swim to the river banks.

Reports said several hundred people were on the bridge when it collapsed at around 18:40 India time (13:10 GMT) on Sunday.

A video shot before the collapse showed it packed with people and swaying and many gripping the netting on its sides.

Gujarat is the home state of Indian Prime Minister Narendra Modi, who has announced compensation for the families of victims. He said he was “deeply saddened by the tragedy”.

The authorities have promised a full investigation. Questions are being asked about whether safety checks were done before the bridge was reopened. It is a popular tourist attraction known locally as Julto Pul (swinging bridge).

Home Minister Harsh Sanghavi said a number of criminal cases had been registered over the incident.

Prateek Vasava was on the bridge at the time of the incident. He told 24 Hours Gujarati-language news channel how he had swum to the river bank.

Several children fell into the river, he said, adding: “I wanted to pull some of them along with me but they had drowned or got swept away.”

Videos showed scenes of chaos as onlookers on the river banks tried to rescue those trapped in the water as darkness fell.