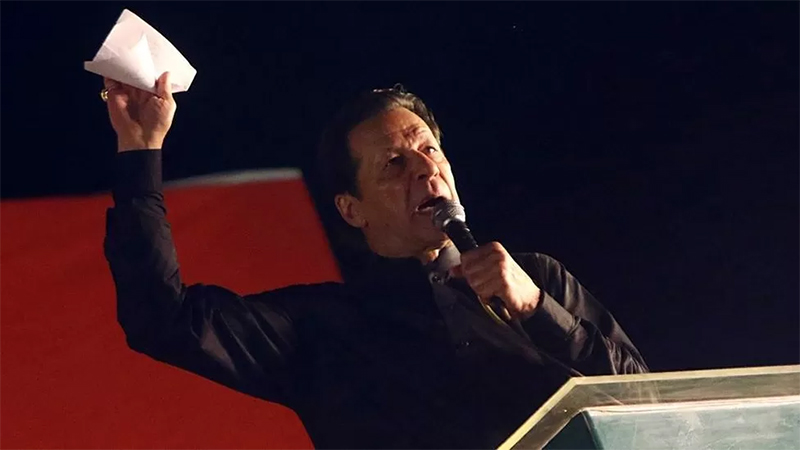 Pakistan’s election commission has disqualified ex-PM Imran Khan from holding public office in a case the former cricketer has described as politically motived.

Mr Khan had been accused of incorrectly declaring details of presents from foreign dignitaries and proceeds from their alleged sale.

The gifts included Rolex watches, a ring and a pair of cuff links.

His lawyers say they will challenge the commission’s verdict in the high court.

Mr Khan called on his supporters to come out and protest the decision on Friday, saying that fundamental rights and democracy had been buried in Pakistan.

Videos on social media showed police firing tear gas to disperse his supporters holding a protest outside the capital Islamabad. Security in the city has been stepped up.

According to Pakistan’s Dawn newspaper, the written ruling says Mr Khan “made false statement [sic] and incorrect declaration before the commission in the statement of assets and liabilities filed by him for the year 2020-21” and so attracted disqualification.

As a result of the disqualification, he “ceases to be a member of the National Assembly of Pakistan and his seat has become vacant accordingly”, the ruling adds.

Legal experts cited by Dawn interpret this as Mr Khan being disqualified till the end of the current National Assembly term, which started in 2018.

The unanimous decision by a five-member panel of the election commission is a huge setback for the former premier, says the BBC’s Anbarasan Ethirajan. Imran Khan remains hugely popular.

Mr Khan admitted last month to having sold at least four gifts he had received during his tenure as prime minister, and that they had been included in his income tax returns.

Government officials must declare all gifts, but are allowed to keep those below a certain value. In some cases, the recipient can buy them back at around 50%, AFP news agency reports.

Mr Khan – who has denied the charges against him – previously said he had not made public some gifts on national security grounds, but in a written submission admitted buying items worth nearly $100,000 (£90,000), and later selling them for more than twice that amount, AFP says.

Faisal Chaudhry, a lawyer in Mr Khan’s team, has told Reuters news agency the election commission tribunal has no jurisdiction in the matter and that the decision will be challenged.

Since then, he has been a vocal critic of the government and the country’s army.

The former leader has toured the country to deliver a series of fiery speeches calling for fresh elections.

The charismatic politician was elected prime minister in 2018, but fell out with Pakistan’s powerful army towards the end of his tenure. After a series of defections, he lost his majority in parliament.