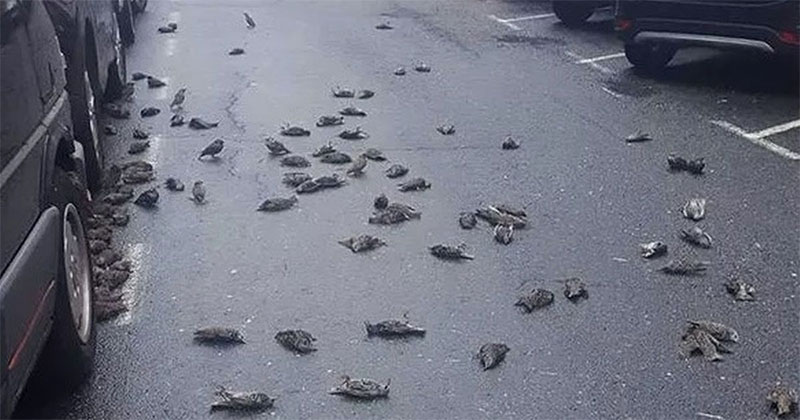 While some local veterinarians probing the incident suggest that the birds may have died after being electrocuted by electric cables, others speculate that the birds could have inhaled toxic fumes generated from a heater nearby.

A shocking video of hundreds of birds suddenly falling from the sky in Chihuahua, Mexico, has left netizens baffled while prompting local ornithologists to start a probe into the mystery that caused their death.

The incident captured by a CCTV camera took place on 7 February when a massive flock of migratory yellow-headed blackbirds suddenly dropped mid-flight on the road like a cloudburst.

It shows that while most of the birds fly away, dozens of them remain dead on the street.

?? SHOCKING VIDEO of Hundreds of Birds dying & falling from the Sky in Mexico in the city of Cuauhtémoc, Chihuahua. The images show migratory birds crashing into the ground. The ‘strange occurrence’ was recorded last Monday at around 5pm. pic.twitter.com/zGfmJELtsz

While local veterinarians and police officers are probing the mysterious deaths of the birds from different angles, netizens are reacting to the incident and speculating about different theories on social media.

While some tweeted that the birds could have fallen after being exposed to 5G technology, others speculated that they could have been electrocuted by power lines. Several others wondered if it is a sign of a bad omen.

However, experts are probing for a more logical reason behind this horrific incident.

Dr Richard Broughton, an ecologist at the UK’s Centre for Ecology and Hydrology, told The Guardian that a predatory bird might have forced them into a tight swirl before dive-bombing them and forcing them to crash.

“This looks like a raptor, like a peregrine or hawk has been chasing a flock, like they do with murmurating (birds flying together in a tight formation) starlings, and they have crashed as the flock was forced low”, Broughton said.

A local veterinarian speculated that the birds might have been poisoned by a combination of wood-burning heaters, agrochemicals, and cold weather in the area.