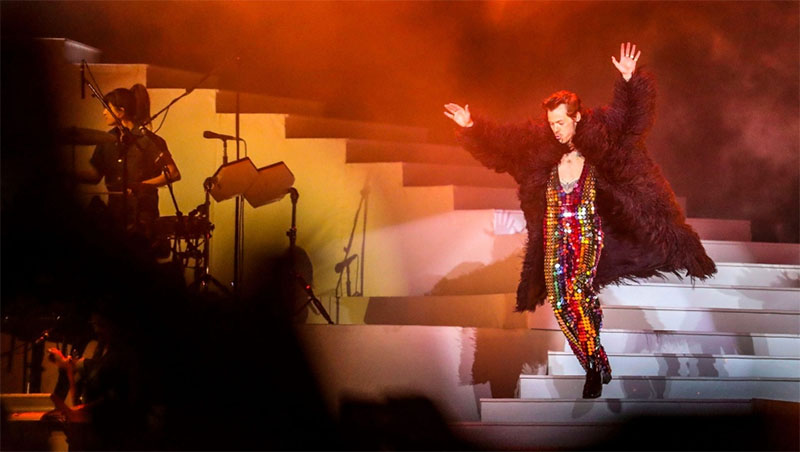 Harry Styles treated fans at his Coachella concert on Friday to an unexpected guest: Shania Twain.

Her appearance didn’t come until the last few minutes of Styles’ set. The iconic refrain of Twain’s “Man, I Feel Like a Woman” began to play as soon as Styles had finished performing a classic from his boy band days with One Direction, “What Makes You Beautiful.”

Styles, dressed in a low-cut jumpsuit emblazoned with rainbow sequins, appeared to look confused until Twain, 56, appeared, rising on a platform from behind the stage dressed in a matching sequined dress and white go-go boots.

“Let’s go girls,” said the queen of country pop, in a video posted by Coachella.

Styles, 28, jumped in for the chorus of “Man, I Feel Like a Woman” and the pair danced playfully on stage to resounding applause.

At the end of the song, the two hugged before sitting on two stools. “In the car, with my mother as a child, this lady taught me to sing,” said Styles. “She also told me that men are trash. To you, for the memories you gave me with my mother, I will be forever grateful,” he said, addressing Twain.

“I am so honoured and thrilled to be here,” said Twain. “I’m kind of lost for words. I’m a bit star-struck, what can I say?”

The pair then performed “You’re Still The One,” a song Twain noted she wrote while Styles was just “a little kid.”

After the exuberant duet, Twain took to Twitter to laud her co-star’s performance. “I mean c’mon … HARRY STYLES,” she wrote.

Styles also performed his record-breaking new single “As It Was” during his performance.

Styles’ set began at 11:35 on Friday, according to the Coachella schedule. Other headliners from the star-studded weekend include Billie Eilish, Arcade Fire, Carly Rae Jepsen, and the Weeknd.

Music icon. Fashion icon. And true friend ❤️ I am honored and thrilled to have joined @Harry_Styles onstage for his @coachella debut. What a magical moment!! And I mean c'mon… WHAT A SHOW 🔥 I'm a huge fan! Grateful we got to create this memory together – Thank you Harry. pic.twitter.com/Tl7OpbSOnN

Britney Spears says she is pregnant