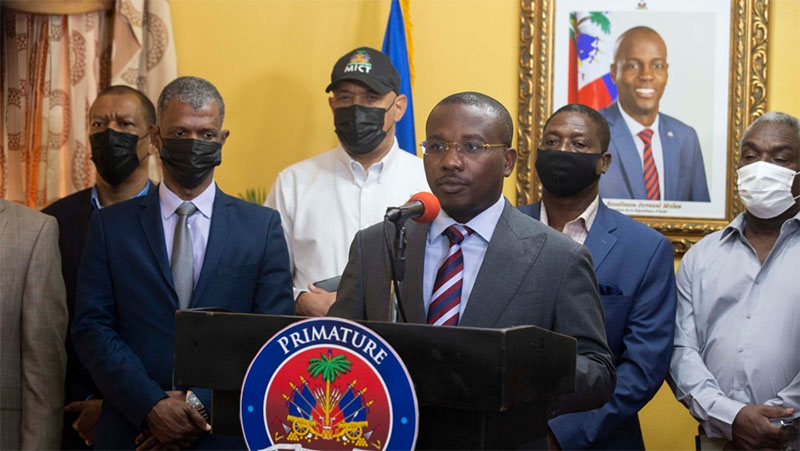 Designated Prime Minister Ariel Henry was to be sworn in to replace interim Prime Minister Claude Joseph, who assumed leadership of Haiti with the backing of police and the military after the July 7 attack at Moise’s private home.

A crowd of international dignitaries and Haitian officials clad in somber suits sat under the shade of pink and white bougainvillea to commemorate Moise in the yard of the Nation Pantheon Museum in Port-au-Prince.

A large portrait of the slain president hung behind Joseph as he spoke to mourners. “The president is dead because of his political and social convictions,” he said.

Joseph accused oligarchs and criminals of assassinating the president’s character and then the president himself. He called on everyone to seize the moment as an opportunity to find a common purpose and durable, viable solutions.

Moise was shot multiple times and his wife was seriously wounded, and while officials have arrested at least 26 people in the case, it remains unclear who ultimately was behind the attack.

Police Chief Leon Charles announced four more formal arrests on Tuesday — at least three of them police officers, whose ranks he did not release.

“There was infiltration in the police,” he said.

Haitian police identified the fourth suspect, who was not a police officer, as Dominick Cauvin.

An individual named Dominick Cauvin has lived in South Florida, spending time in recent years in Miami, Miami Beach and Pembroke Pines, public records show. He’s listed as an independent security consultant, according to his LinkedIn profile; his private Instagram account lists him as founder and owner of Armotech International Corp. and Armotech Group S.A., in Haiti.

Cauvin is currently listed as CEO for a company based in Pembroke Pines, Fla., called Armotech International Corp., which he registered with the state on Nov. 2, 2020, public records show. He set up a similarly named company, the Armotech Group Inc., in early January 2020, only to dissolve it in April 2021, records show.

Authorities earlier said they had detained and isolated — but not formally arrested — several high-ranking police officials as they tried to determine why the attackers were able to reach the president without any of his guards being injured.

Henry, a neurosurgeon and former Cabinet minister, was scheduled to be sworn in on Tuesday afternoon after promising to form a provisional consensus government to lead Haiti until elections are held.

“We will need this unity to overcome the many challenges that beset us,” Henry said. “Some have observed the latest events with amazement, others wonder with reason about the management of the country.”

Henry said he has met with various unidentified actors as well as civil society and the private sector.

The government released the names of Henry’s Cabinet, with the ministers of justice, economy, finance, agriculture and others keeping their positions.

Haiti Elections Minister Mathias Pierre told The Associated Press on Monday that Joseph would step down and cede the position to Henry, who was chosen for the post by Moise shortly before he was killed but had not been sworn in.

The change in leadership comes after a group of key international diplomats called on Henry to create a “consensual and inclusive government” in a statement issued Saturday that made no reference to Joseph. The Core Group is composed of ambassadors from Germany, Brazil, Canada, Spain, the U.S., France and the European Union as well as representatives from the United Nations and the Organization of American States.

Robert Fatton, a Haitian politics expert at the University of Virginia, said Joseph’s departure was to be expected.

“Joseph’s fate was sealed over the weekend,” he said. “Everything that happens in Haiti has a powerful foreign component.”

A main opposition coalition known as the Democratic and Popular Sector called Henry a puppet of the international community and rejected his appointment.

“This step is only a political provocation that will add fuel to the fire and push the country further into crisis,” it said.

On the same day the Core Group issued its statement, first lady Martine Moise arrived back unannounced in Haiti to the surprise of many. She had been recovering at a hospital in Miami. On Monday, her office issued the first public statement since the killing, thanking Haitians for their support.

“Your moral support gives the presidential family the courage to go through this great ordeal and helps it transcend these moments of indescribable pain,” it said.

The police chief said Tuesday that in addition to the new arrests, seven high-ranking police officials — including those with the president’s security detail — had earlier been placed in isolation, though they are not formally considered suspects.

He said 18 Colombians, five Haitians and three Haitian-Americans have been arrested.