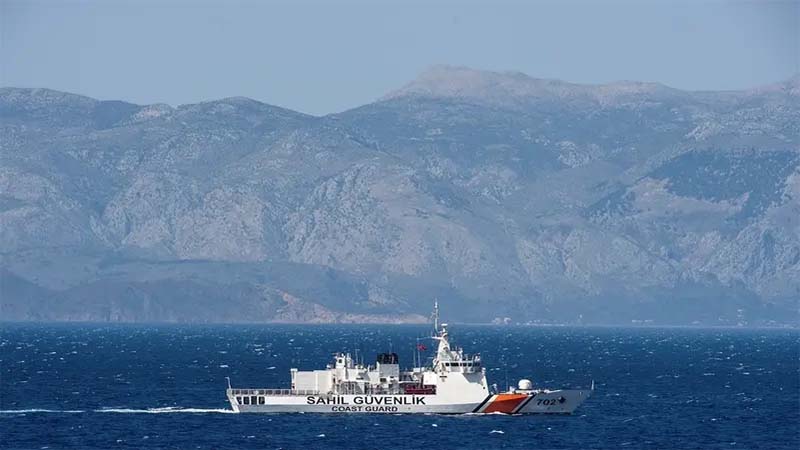 Turkey said the Greek Coast Guard fired on a ship in international waters in the northern Aegean Sea, marking another potential escalation of tension between the NATO countries on Saturday, as Greek Prime Minister Kyriakos Mitsotakis accused its neighbor of “bullying.”

The vessel wasn’t emitting a signal, according to a Greek shipping ministry official, so the Greek Coast Guard requested it stop to be boarded. The captain refused the control and sped off, prompting the Coast Guard to fire warning shots in the air and not at the vessel, said the official, requesting anonymity as details have not yet been made public.

The incident serves as a reminder that tensions continue to percolate in the region. Ahead of next year’s elections, Turkish President Recep Tayyip Erdogan has stepped up criticism of what Turkey calls a growing Greek military buildup on islands close to its coastline as well as Western military support to Athens, with which Ankara has long-running territorial disputes.

Speaking late Saturday at the Thessaloniki International Fair in northern Greece, Mitsotakis addressed the general situation, saying Greece would not bow to threats.

Mitsotakis called on Turkey to stop with its “unhistorical arguments” and said that Greece says “no, Mr. Erdogan,” to his country’s threats. “Bullying yok,” the premier said, using the Turkish word “yok” meaning that aggressive rhetoric should stop.

Greece has repeatedly called on Turkey to stop questioning its sovereignty over the Dodecanese — a group of islands off the Turkish coast including Rhodes and Kos — that were ceded to Greece by Italy following World War II. Turkey argues that Athens must comply with a 1947 peace treaty that allows only a small contingent of Greek soldiers on the Dodecanese.