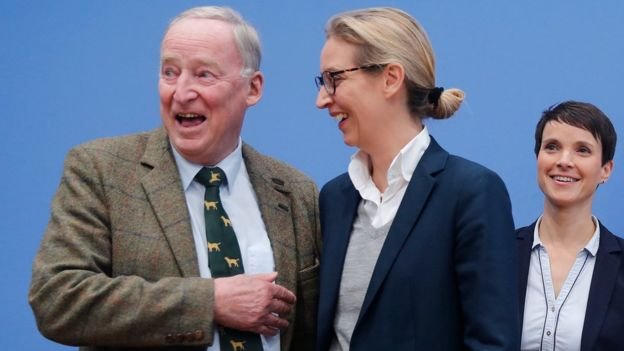 Germany’s right-wing, nationalist AfD party has vowed to fight “an invasion of foreigners” into the country, after winning its first parliamentary seats.

Chancellor Angela Merkel has been re-elected for a fourth term but her conservative CDU/CSU bloc received its worst result in almost 70 years.

Her bloc’s current coalition partners, the Social Democrats (SPD), say they will go into opposition after historic losses.

The AfD’s campaign capitalised on a backlash over Mrs Merkel’s decision to open Germany’s borders to migrants and refugees in 2015.

Its success has shocked Germany’s political establishment, and protests against the anti-Islam party have been held in several cities following the election result.

“One million people, foreigners, being brought into this country are taking away a piece of this country and we as AfD don’t want that,” Mr Gauland told a news conference on Monday.

“We say I don’t want to lose Germany to an invasion of foreigners from a different culture. Very simple.”

He said the AFD – which is expected to take 94 seats in the 709-seat federal parliament as the third-largest party – had been elected “to uncompromisingly address” immigration issues.

But discord is already evident in the party – with another leader, Frauke Petry, declaring at the same news conference she would not join the AfD’s parliamentary group despite winning a seat, before abruptly leaving the room to the apparent surprise of other leaders.

Ms Petry said there was “disagreement over content” in the party and had earlier criticised Mr Gauland for saying the AfD would “hound” Mrs Merkel.

While her bloc remains the largest in the Bundestag, the lower house of parliament, it is the worst result for the alliance between the Christian Democrats (CDU) and the Christian Social Union (CSU) since 1949, when national elections were held in Germany for the first time after World War Two.