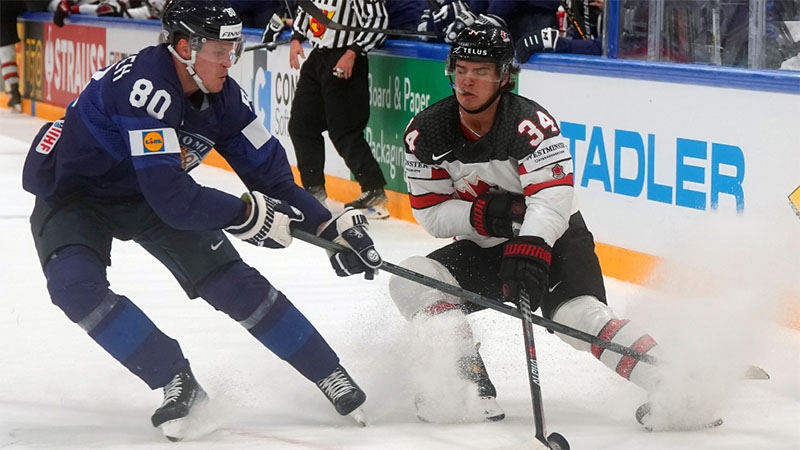 HELSINKI – Sakari Manninen scored in overtime to lift host Finland to a 4-3 win over Canada in a wild gold-medal game at the men’s world hockey championships on Sunday.

The host Finns held a 3-1 lead late in the third before the Canadians struck for two goals with their goaltender pulled.

Whitecloud scored with 2:12 remaining to put Canada to within one goal before Comtois forced three-on-three overtime with the tying goal with 84 seconds remaining in regulation.

Manninen’s winner was scored on the power play six minutes into the extra frame after Thomas Chabot was whistled for a hooking minor.

With the 4-on-3 advantage, Manninen was able to sneak into the right circle with all Canadian eyes on Granlund who had the puck at left point. Recognzing this, Granlund fired a quick pass to the unmarked Manninen who unleashed a howitzer one-timer to clinch the world title.

It’s the fourth time that Finland has won the world championship.

This was the third time in as many word championships these two nations have met in the gold-medal game.

Finland won in 2019, then Canada took revenge in 2021, followed up, now, with the Finns reclaiming their title. The 2020 championship was cancelled because of the COVID-19 pandemic.

The Finns were also the 2022 Olympic champions back in February.

Canada led 1-0 entering the third period after Cozens opened the scoring on a Canadian power play four minutes into the second period.

Granlund, who plays for the NHL’s Nashville Predators, evened the score early in the third on a five-on-three advantage with Canada’s Noah Gregor (tripping) and Cole Sillinger (high-sticking) both sitting in the box.

Canadian goaltender Chris Driedger suffered an injury on the play and was replaced by backup Matt Tomkins, who quickly surrendered a second power-play goal to Backlund.

Earlier on Sunday, Czechia hammered the United States 8-4 to win the bronze medal as David Pastrnak scored a hat trick, all in the third period.