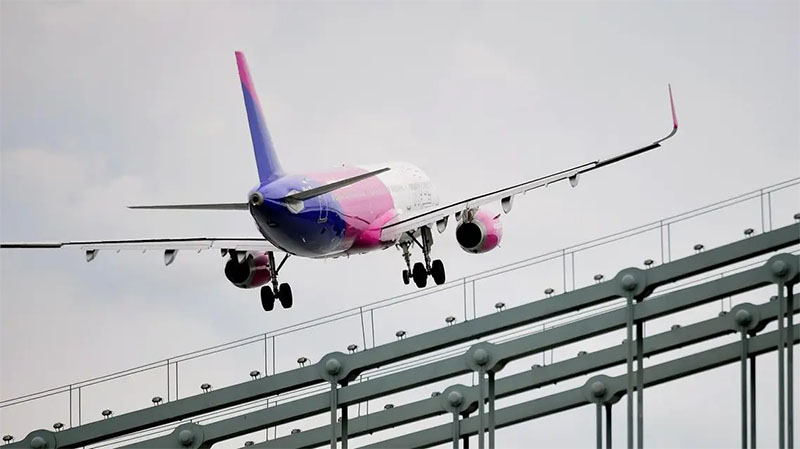 European carriers took further steps to avoid Ukraine, while airline shares sank after tension mounted through the weekend over Russia’s troop buildup at the border.

KLM stopped flying to Ukraine on Saturday after the Dutch government raised its alert to red, advising citizens to leave because security was uncertain.

Norwegian Air Shuttle ASA said on Monday it would stop flying over Ukrainian airspace out of precaution, while two of the country’s airlines said insurers had at least temporarily pulled coverage, forcing them to move leased planes to the European Union.

Russia has repeatedly denied it plans to invade Ukraine.

Shares of Hungary’s Wizz Air Holdings Plc slid as much as 11 percent, the biggest drop since November, to lead a decline in European airline stocks. Deutsche Lufthansa AG was down 4.4 percent at 4:32 p.m. in Frankfurt, while Air France-KLM sank 5 percent in Paris.

Carriers have been cutting exposure to Ukraine for weeks as diplomats work to avoid a further escalation. The US has issued a series of warnings amid a Russian buildup of an estimated 130,000 troops at the border.

Airlines had generally been avoiding overflying Ukraine since 2014, when a Malaysia Airlines Bhd. jetliner was shot down over separatist-held territory in the eastern part of the country.

Commercial flights are still prohibited over eastern Ukraine and Crimea.

A Norwegian Air Shuttle spokesman said the decision on flyovers applies to “a very small number of routes and won’t have significant consequences to its operation.

Ryanair Holdings Plc reduced frequencies in January, while KLM was among the carriers that altered schedules last month to avoid crews having to stay overnight in Ukraine’s capital city.

Some flights to Kyiv were still operating normally.

Wizz said Monday that it is monitoring the situation. The low-cost carrier said in January it was ready to move the four aircraft it bases in Ukraine if necessary.

Sweden’s SAS AB said it would keep flying to Kyiv for now and could divert routes if required. Finnair Oyj, which has no direct flights to Ukraine, said it was monitoring developments.

Air France planned to operate its flight to Kyiv Tuesday as usual, according to a spokesman, noting that the rotation is carried out during the day without requiring crew to stay overnight.

Flights originating in Ukraine account for about 3.9 percent of Wizz’s seats scheduled this quarter, according to analysts at Goodbody, while the Budapest-based carrier’s Russian capacity is about 0.8 percent.

At an emergency meeting on Sunday, Ukraine’s cabinet allocated $600 million as guarantees for insurers and leasing companies so that airlines could continue flights to the country.

Ukraine’s SkyUp said it had to land a Feb. 12 flight from the Portuguese island of Madeira to Kyiv in Chisinau, Moldova, instead, after insurers said they would pull coverage. That led aircraft lessors to demand planes be returned to the EU.

Passengers were taken by bus to Kyiv, according to a statement from the airline — about seven hours away by road.

SkyUp resumed selling tickets and flying fully in Ukraine, according to an Interfax report on Monday.

Ukraine International Airlines said separately on Monday that insurance was terminated for flights in Ukraine airspace. At the request of lessors, the carrier said it was sending five Boeing 737-800 aircraft to Spain while retaining other planes in its fleet. Two jets were sent for scheduled engine maintenance in Belgrade.

Germany urged to save citizen risking execution in Iran