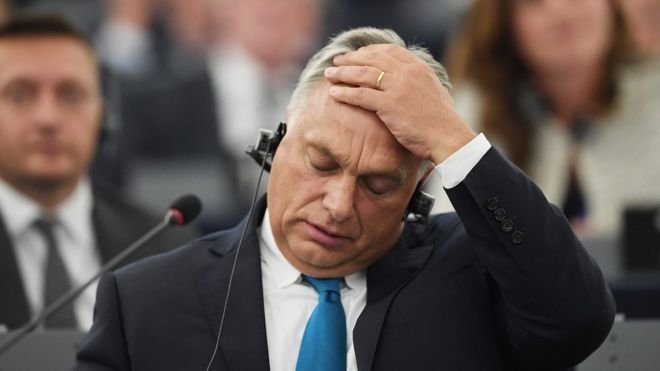 The European Parliament has voted to pursue unprecedented disciplinary action against Hungary over alleged breaches of the EU’s core values.

Prime Minister Viktor Orban’s government has been accused of attacks on the media, minorities, and the rule of law – charges which he denies.

MEPs backed the vote by 448 to 197, giving it the two-thirds required for proceedings to go ahead.

Wednesday’s vote is the first time the European Parliament has voted to take such action against a member state under EU rules.

Measures could include suspension of the country’s voting rights in Europe or other sanctions.

Mr Orban personally spoke to the parliament on Tuesday in defence of his country, labelling the threat of censure as a form of “blackmail” and an insult to Hungary.

He claimed a report by Dutch MEP Judith Sargentini was an “abuse of power”, and included “serious factual misrepresentations”.

Since coming to power, Mr Orban’s government has taken a hardline stance against immigration. It introduced a law which made it a criminal offence for lawyers and activists to aid asylum seekers, under the banner of “facilitating illegal immigration”.

Ms Sargentini’s report into Hungary’s ruling Fidesz party alleged such actions were “a clear breach of the values of our union”.

Under an EU rule called Article 7, breaching the union’s founding principles can lead to suspending a member state’s rights as a punitive measure.

Suspension of Hungary’s voting rights is the most serious possible consequence – but is considered unlikely, as Poland’s nationalist government may support Hungary.

Poland is itself facing disciplinary proceedings, launched by the European Commission in December last year. The case has yet to reach the European Parliament.

The decision on Hungary will now be referred to the the EU’s 28 member states to consider.