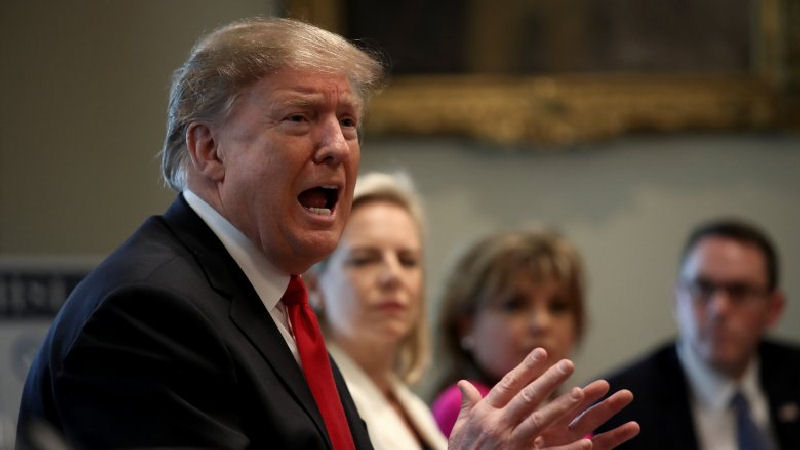 Donald Trump is arguably the most divisive figure on the planet. In America, half the people you find (okay, it’s actually about 37 percent as of January 2019, but you know what we mean) seem to love him, while the other half loathe him with the same kind of passionate vitriol that’s usually reserved for bankers, reality TV stars and people who click “reply to all” on email chains. He’s controversial, is what we’re getting at. To his fans, it’s almost as if he can do no wrong. To his critics, he can do nothing right.

But there’s one aspect of Trump’s life which must surely unite all but his most zealous followers in their sheer, unbridled disgust: the things he eats and the way he eats them. This is a man who, for whatever reason, chooses to indulge in some of the strangest eating habits ever enjoyed by a member of the presidency. From burnt steaks to soggy taco bowls, these are Donald Trump’s worst crimes against food.

Eating steak burnt to a crisp

This is a famous one. In 2017, a reporter from the Independent Journal Review reserved a table at the steakhouse in Washington D.C.’s Trump International Hotel, hoping to catch a glimpse of what the President ordered. Turns out, he opted for a $54 dry-aged New York strip — which he insisted was to be cooked well-done. And this wasn’t the first time, either: according to his ex-butler Anthony Senecal, Trump would regularly order steak that was cooked so well that it would rock on the plate. Usually, it would be slathered in ketchup.

Now, it doesn’t exactly help that ordering your steak well-done can cause you physical and mental harm — including (according to some studies) cancer and dementia. An article published in 2017 for Eater also suggested that ordering well-done steak could suggest an aversion to risk, timidity, defensiveness, and even insecurity in the person eating it. Worst of all, however, is the absolute misery of deciding to waste a good cut of steak in a way that routinely breaks the hearts of chefs.

Eating burgers without the buns

Trump is well-known for his love of fast food, and McDonald’s might be his favorite of all. Back in 2017, it was revealed that his regular order at the iconic chain consisted of two Big Macs, two Filet-O-Fish sandwiches and a chocolate shake. That in itself is a pretty bizarre order (why the fish/beef combination; why the chocolate shake; why so much?), but things became even weirder when Trump’s former campaign aide Corey Lewandowski let slip further details on Trump’s McDonald’s preferences.

According to Lewandowski, Trump chooses to eat his McDonald’s sandwiches without the buns. In fact, he wouldn’t touch any of the bread included with his order. In 2018, Rudy Giuliani admitted the President routinely orders burgers with just half a bun. On the surface, it would seem that he does this in order to mitigate some of the unhealthier aspects of the food he eats by cutting out some of the carbs and calories. Unfortunately, this effort is slightly negated by the red meat he’s leaving on the plate. His plate may be low in carbs, but it’s still pretty high in fat. Try a salad next time, Donald.

Eating KFC with a knife and fork

Trump doesn’t let his love of fast food end with McDonald’s, though. He’s also a fan of all kinds of other big chains, including KFC. And what’s wrong with that? It’s fried chicken — no big deal, right? Well, the problem here isn’t so much what Trump is eating as it is just how he eats it. On August 2, 2016, while on the campaign trail, the President-to-be uploaded a photograph to Twitter in which he was shown eating KFC on a plate with a knife and fork.

Seriously, what the hell? Who does that? Who takes a piece of fried chicken out of a KFC bucket and thinks, “This bad boy would look great skewered by stainless steel”? Of course, a cynic might argue that the whole photo was simply staged by a drastically out-of-touch campaign team to make it look like Trump is your everyday, down-to-earth, totally ordinary man of the people. Because, of course, nothing says “everyday, down-to-earth, totally ordinary man of the people” like dining on your private jet.

Scraping the toppings off pizzas

Proving once and for all that there’s no type of fast food that the 45th President of the United States of America won’t butcher for his own amusement is the revelation that he only eats the toppings on pizzas. Trump himself told US Weekly that he never eats the dough and instead scrapes off the toppings, so as to save on calories. It’s basically the whole burger-without-a-bun thing, except somehow far, far worse.

So what we’ve really got here is a guy who doesn’t so much like to eat pizza as he does just feast on a mush of cheese, tomato and toppings. And just in case that wasn’t enough, here’s a bonus crime for you: Trump once took Sarah Palin to eat at a Times Square pizzeria and shocked the entire city into a stupor by cutting into his pizza with — you guessed it — a knife and fork. Yeesh.

Considering he’s such a big eater, it’s quite surprising that Trump doesn’t like breakfast. Despite getting up early in the morning (he only sleeps for a few hours every night) he typically doesn’t eat a morning meal. When he does have one, he sticks to a McDonald’s breakfast or something simple, such as bacon and eggs. Sadly, this means Trump is missing out on a whole world of pancakes, sausages, hash browns, waffles, fruit salads, oatmeal, toast, omelettes and so much more. Who would ever do that to themselves?

Of course, missing out on breakfast isn’t a very good idea health-wise, either. In fact, skipping it four to five times per week can even increase your risk of contracting Type 2 diabetes by up to 55 percent. Eating later breakfasts can also contribute to obesity in people who already suffer from diabetes, while people who eat regularly in the morning are more likely to be a healthy weight than people who don’t.

One of Trump’s most notorious tweets (although there are so many to pick from) came in 2016, when he posted a photo of himself eating a taco bowl from Trump Tower on Cinco de Mayo, accompanied by the caption “Happy #CincoDeMayo! The best taco bowls are made in Trump Tower Grill. I love Hispanics!”. We’re not going to go into the plethora of problems with that particular tweet (we’ll let your conscious do that), but instead focus on that taco bowl.

A year after that tweet was posted, Business Insider decided to visit Trump Grill and try one of these taco bowls for themselves. What they found was a taco bowl which could be described as “passable at best,” with “bland and goopy” guac, a soggy bowl, and “tolerable, but underseasoned” beef. The cheese had come out of a bag. It contained iceberg lettuce. The whole thing cost $19.

Most of the food crimes we’ve covered thus far have been to do with the way Trump consumes food. This one is rather unique in the sense that it relates to how he sells it. And he sells it badly.

Drinking a dozen Cokes a day

Of course, Mr. Trump’s wild ride doesn’t end with just food. No, he’s got a few shocking drinking habits under his belt, too. In 2017, newspapers began to report that Trump consumes up to 12 cans of Diet Coke every day — and even has a button which summons his household staff to deliver them. It’s lucky for Trump that he drinks Diet Coke rather than the regular kind (despite once tweeting “I have never seen a thin person drinking Diet Coke”), because consuming that much would pile on 1,680 calories and 468 grams of sugar every day.

Unfortunately, the health effects of drinking diet sodas aren’t currently very clear, and some professionals suggest that the artificial sweeteners they utilize can confuse the brain and desensitize the body to sugar. Drinking any soda as much as Trump does can also lead to dementia, strokes, migraines, insomnia, restlessness, muscle tremors and weight gain.

Related Topics:Donald TrumpfoodLifestyleWeird
Up Next

No visitors at Australian zoo, but animals train for when lockdown ends