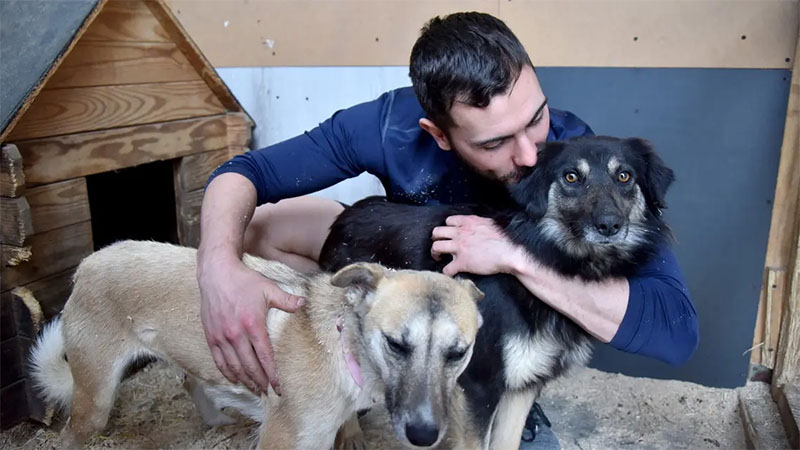 She believes they’ve been great for her mental health. “When you come home from a bad day, and they’ll comfort you. All they want is cuddles and love.”

But Chee Lu noticed that one of the dogs, Chopper, wasn’t very happy.

“I could tell that she was really anxious, and the moment Chopper saw any other dog, off-lead, on-lead, she would react and bark at them and run away,” says Chee Lu.

After Tian took her furry friend to veterinary psychiatrist Dr Jacqui Ley, the dog was diagnosed an anxiety disorder.

“About one in five dogs has an anxiety problem,” says Dr Ley.

Common signs of anxiety in dogs include hyper vigilance, restlessness or pacing, aggressive behavior, barking or howling and panting.

Trauma also contributes and research also suggests dogs can pick up on chronic anxiety in humans, but that doesn’t mean that owners are at fault.

“Anxiety disorders are not infectious. If a dog has a mental health problem it’s because part of their brain is not working in balance with the rest of their brain,” says Dr Ley.

While working with a dog trainer can help some dogs, others need psychiatric treatment which can include the same medication, anti-depressants, taken by humans.

While Australian data is limited, American surveys suggest around eight percent of owners there, give their dogs anxiety medications.

“We pretty much treat anything that’s not human,” says Dr Ley.

After six months of treatment, Chopper is calmer and happier. “She’s got more time to enjoy the little things in life,” says Chee Lu, reducing anxiety for her owner as well.