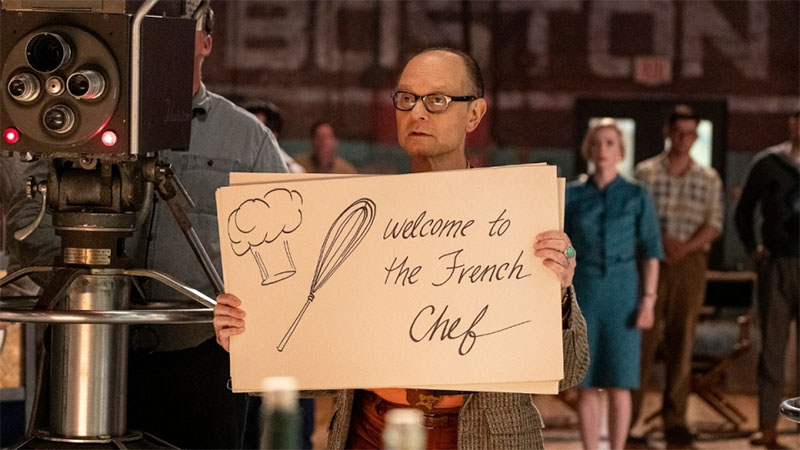 NEW YORK — David Hyde Pierce returns to TV this spring playing a familiar part — an erudite man who adores fine food, wine and art. But this has nothing to do with “Frasier.”

Pierce is playing Paul Child, husband and chief cheerleader of Julia Child, whose warbling, encouraging voice and able hands brought the intricacies of French cuisine to American home cooks through her TV series and books.

“These are two people of great depth, of great complexity of character, who found each other, and I think we all are luckier for it,” said Pierce. “I really loved Paul, having come to study him.”

HBO Max’s eight-part “Julia” traces its culinary heroine’s unlikely arc from home kitchen cook to national icon, all the while supported by her husband, a diplomat-turned-artist. “You’re teaching Americans how to taste life, and they’re listening; that’s (expletive) huge,” he tells her.

Viewers will see Peter Child evolve from a snob who refuses to allow a television set in their home to a man eager to hold cue cards for his wife on the kitchen set of “The French Chef.”

“I think about him in comparison to the character of Niles on ‘Frasier’ because they’re two characters who obviously both love food and wine and stuff like that,” said Pierce. “But I think of Niles as a person who lived in spite of his body. And Paul is a man who lives completely in his body.”

Opposite him is Sarah Lancashire as the title character, nailing Julia’s vocal and physical tics, the clucking and cooing, lurching movements and sudden gales of laughter. They make a fascinating couple — she impulsive and charmingly awkward and he more introspective and careful.

Viewers will instantly recognize Julia, but may know nothing of her husband, who didn’t make appearances on her show and whose influence is more subtle. Take her kitchen: Paul was the one who drew outlines of every single pot and pan on a pegboard so that they would always go back to the right place.

“That combination of Julia’s spontaneity and his meticulousness really was part of what made them such a great pair,” said Pierce.

Created by Daniel Goldfarb, the series examines workplace politics, feminism and the downside of celebrity. The role of Peter is also an interesting model of what it means to be an ally. “It can’t be easy having a woman steal your shine,” he is told.

“It was just as Julia’s star is ascending when his was starting to dim,” said Pierce. “It is a credit to him and a really important part of the relationship to examine that, especially at that time given men’s roles and women’s roles.”

Goldfarb, a co-producer of “The Marvelous Mrs. Maisel,” said the marriage was unusual in that it evolved, starting in the old-fashioned 1950s and growing into a modern partnership that was playful and lusty.

“It’s one of the great love stories of all time,” he said. “It sort of grew and changed, and they play different roles and different times of their life.”

Chris Keyser, the showrunner and executive producer, credits Paul Child with bravery for being able to see that the world was changing and going along with it.

“This is something I think very moving about figures of history who bridge two different periods and are able to do that,” he said. “We find him really moving and remarkable.”

The project was filmed during the pandemic, making research challenging. Paul Child died in 1994 and Pierce was unable to access the couples’ cache of letters and writings at Harvard University because of the shutdown. But librarians read excerpts to him over the phone, and Pierce consulted Paul’s twin brother’s memoir.

Pierce found in Paul Child a complex man, a one-time merchant marine, who had a black belt in judo, played the violin and had a fear of heights. He had once gotten a job in Paris repairing stained glass in cathedrals. He recognized talent and cheered it — especially when it came from his wife.

“He realizes suddenly that she’s a star. The things that he sees in her — the thing that makes her just glow in his eyes — is something that is bigger than both of them,” said Pierce.

Later episodes deal with the costs of that pivot, the toll it takes when someone willingly steps behind their partner and lets their own dreams slip aside.

“There are moments when you sit by yourself and look at your life and think, ‘Wow, am I done? I mean, I love doing this, but are all those achievements that I started to make behind me now?”‘ Pierce said.

Those kind of questions have real relevance as we emerge from the pandemic, Pierce said. The pause has given us a chance to ask deep questions about where we are going and what we really want to do.

“COVID made so many people have to take a step back from their lives. Many people, after two years plus, looked at their lives that they were just taking for granted and were suddenly thinking, `Is this what I want to be doing? Should I explore something else?’ So there’s a funny parallel there.”

Kourtney Kardashian and Travis Barker only kind of got married