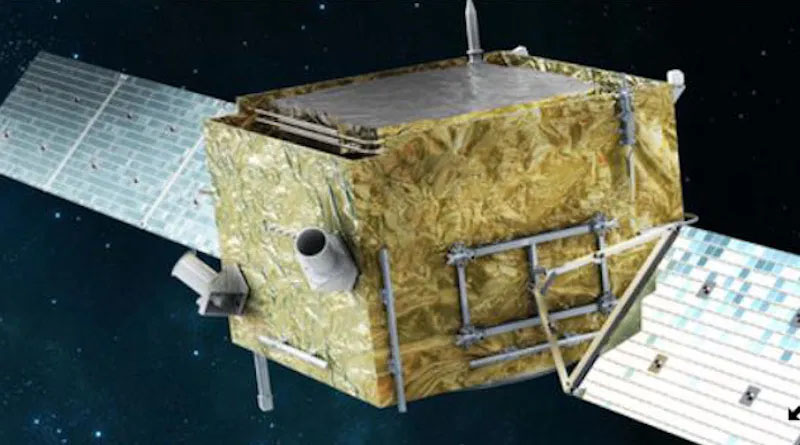 Dark Matter Particle Explorer (DAMPE) Collaboration directly observed a spectral softening of helium nuclei at about 34TeV for the first time. This work was based on measurements data of the helium spectrum with kinetic energies from 70 GeV to 80 TeV (17.5 GeV/n to 20 TeV/n for per nucleon) recorded by the DAMPE.

The relevant results were published in Physical Review Letters.

Galactic cosmic rays (GCRs) offers important ways to deeply understand the astrophysical particle origin and accelerators and the interstellar medium of the Galaxy. Helium nuclei, the second most abundant nuclear element of cosmic rays, is a distinguishing feature of space.

As for GCRs, the energy spectrum is supposed to follow a negative power law distribution when energies are below the “knee” (at 3-4 PeV). Nevertheless, recent experiments observed a hardening of the spectrum at kinetic energy of several hundred GeV/n, indicating possible new sources and acceleration mechanism of GCRs.

In this study, the GCR helium spectrum from 70 GeV to 80 TeV was measured using 4.5 years of the DAMPE flight data. The maximum measurable rigidity reached by DAMPE improved to 10 times higher than that detected by the Alpha Magnetic Spectrometer (AMS-02) led by DING Zhaozhong. The results confirmed the hardening feature of the helium spectrum, reported previously in experiments measured by AMS-02, at around 1.2 TeV given a high significance of 24.6σ. Besides, a softening feature was further revealed at around 34 TeV with a significance of 4.3σ.

DAMPE Collaboration published the measurement results of cosmic-ray proton spectrum in 2019 (Science Advances) and observed changes of the spectral index at about 14 TeV. Compared with the DAMPE proton spectrum, The DAMPE helium nuclei spectrum showed similar trend, which means the changes of power-law spectral indices γ may be dependent on particle charge, though a mass-dependent softening could not be excluded limited by current data.

In this work, the team led by Prof. HUANG Guangshun and Prof. ZHANG Yunlong from the State Key Laboratory of Particle Detection and Electronics of the University of Science and Technology of China (USTC) first identified the quenching effect of BGO crystals on relativistic heavy ions by investigating the ionization energy response of BGO calorimeter to ions. Prof. WEI Yifeng quantified quenching factors of ions with different energies. This work efficiently helped the reconstruction of helium energy spectrum.

BGO calorimeter, the main sub-detector for energy measurement of DAMPE, was designed by the team led by Prof. AN Qi and Prof. LIU Shubin from USTC. It covers wider range of energies, and has better energy resolution and particle discrimination ability than other on-orbit detectors.

These results suggest the existence of an accelerator for cosmic rays near earth producing protons and helium nuclei, and the softening energy is related to its upper limit value, which extends our understanding of GCR sources and acceleration mechanisms.