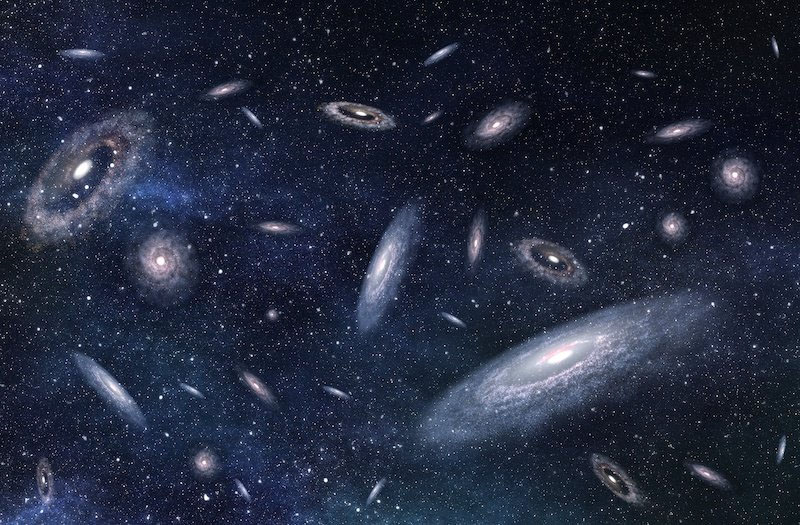 A new map of dark matter in the local universe reveals several previously undiscovered filamentary structures connecting galaxies. The map, developed using machine learning by an international team including a Penn State astrophysicist, could enable studies about the nature of dark matter as well as about the history and future of our local universe.

Dark matter is an elusive substance that makes up 80% of the universe. It also provides the skeleton for what cosmologists call the cosmic web, the large-scale structure of the universe that, due to its gravitational influence, dictates the motion of galaxies and other cosmic material. However, the distribution of local dark matter is currently unknown because it cannot be measured directly. Researchers must instead infer its distribution based on its gravitational influence on other objects in the universe, like galaxies.

“Ironically, it’s easier to study the distribution of dark matter much further away because it reflects the very distant past, which is much less complex,” said Donghui Jeong, associate professor of astronomy and astrophysics at Penn State and a corresponding author of the study. “Over time, as the large-scale structure of the universe has grown, the complexity of the universe has increased, so it is inherently harder to make measurements about dark matter locally.”

Previous attempts to map the cosmic web started with a model of the early universe and then simulated the evolution of the model over billions of years. However, this method is computationally intensive and so far has not been able to produce results detailed enough to see the local universe. In the new study, the researchers took a completely different approach, using machine learning to build a model that uses information about the distribution and motion of galaxies to predict the distribution of dark matter.

The researchers built and trained their model using a large set of galaxy simulations, called Illustris-TNG, which includes galaxies, gasses, other visible matter, as well as dark matter. The team specifically selected simulated galaxies comparable to those in the Milky Way and ultimately identified which properties of galaxies are needed to predict the dark matter distribution.

“When given certain information, the model can essentially fill in the gaps based on what it has looked at before,” said Jeong. “The map from our models doesn’t perfectly fit the simulation data, but we can still reconstruct very detailed structures. We found that including the motion of galaxies — their radial peculiar velocities — in addition to their distribution drastically enhanced the quality of the map and allowed us to see these details.”

The research team then applied their model to real data from the local universe from the Cosmicflow-3 galaxy catalog. The catalog contains comprehensive data about the distribution and movement of more than 17 thousand galaxies in the vicinity of the Milky Way — within 200 megaparsecs. The resulting map of the local cosmic web is published in a paper appearing online May 26 in the Astrophysical Journal.

“Having a local map of the cosmic web opens up a new chapter of cosmological study,” said Jeong. “We can study how the distribution of dark matter relates to other emission data, which will help us understand the nature of dark matter. And we can study these filamentary structures directly, these hidden bridges between galaxies.”

For example, it has been suggested that the Milky Way and Andromeda galaxies may be slowly moving toward each other, but whether they may collide in many billions of years remains unclear. Studying the dark matter filaments connecting the two galaxies could provide important insights into their future.

“Because dark matter dominates the dynamics of the universe, it basically determines our fate,” said Jeong. “So we can ask a computer to evolve the map for billions of years to see what will happen in the local universe. And we can evolve the model back in time to understand the history of our cosmic neighborhood.”

The researchers believe they can improve the accuracy of their map by adding more galaxies. Planned astronomical surveys, for example using the James Web Space Telescope, could allow them to add faint or small galaxies that have yet to be observed and galaxies that are further away.

In addition to Jeong, the research team includes Sungwook Hong at the University of Seoul/Korea Astronomy and Space Science Institute in Korea, Ho Seong Hwang at the Seoul National University in Korea, and Juhan Kim at the Korea Institute for Advanced Study.

Materials provided by Penn State. Original written by Gail McCormick. Note: Content may be edited for style and length.