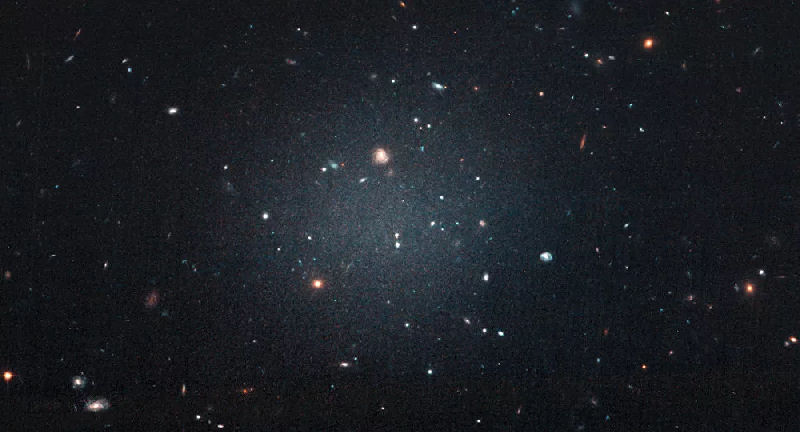 Dark matter doesn’t reflect, emit, or absorb light; it is invisible. Scientists don’t know what it consists of, yet it is believed that it has played a crucial role in the evolution of the universe and is thought to make up 85 percent of all matter.

65 million light years from Earth, there are two ultra-diffuse (with extremely low luminosity) galaxies – NGC 1052-DF2 and NGC 1052-DF4. Both belong to the satellite galaxy category and orbit a massive and more luminous one – NGC 1052. Recent observations of the two galaxies have showed that they contain very little, if any, dark matter. This puzzle has challenged scientists’ understanding of how galaxies form. Now researchers from the University of California and their colleagues from Tsinghua University in Beijing claim to have solved the mystery.

The researchers looked at two theories that predict dark matter distributions in the inner regions of galaxies as well as that explain how the overall structure of the universe emerges. The first one – CDM (cold dark matter) – predicts that dark matter particles interact weakly with ordinary matter and that they are collisionless, aside from gravity. The second theory – SIDM (self-interacting dark matter) contradicts CDM and assumes that dark matter particles have strong interactions through a new dark force and collide with each other in a galaxy’s inner halo.

According to a study, published on 9 September in the journal Physical Review Letters, the researchers posited that the two galaxies may be losing their mass through tidal interactions with their host galaxy NGC 1052. The scientists then ran simulations reproducing the properties of both galaxies through tidal stripping – the stripping away of material by NGC 1052. This occurs because satellite galaxies can’t retain the mass that has been stripped away with their own gravitational force, so the mass is added to NGC 1052. While running the simulations, the researchers considered both the CDM and SIDM scenarios.

According to their results, the SIDM theory forms galaxies that lack dark matter, like the two in question, more favourably than the CDM scenario.

“Tidal mass loss could occur in both CDM and SIDM halos”, said Dr Hai-Bo Yu, a researcher at the Department of Physics and Astronomy at the University of California, Riverside. “In CDM, the inner halo structure is ‘stiff’ and resilient to tidal stripping, which makes it difficult for a typical CDM halo to lose sufficient inner mass in the tidal field to accommodate observations of DF2 and DF4. In contrast, in SIDM, dark matter self-interactions could push dark matter particles from the inner to the outer regions, making the inner halo ‘fluffier’ and enhancing the tidal mass loss accordingly. Further, the stellar distribution becomes more diffuse”, Dr Yu said.

NASA astronauts splash down after journey home aboard SpaceX capsule