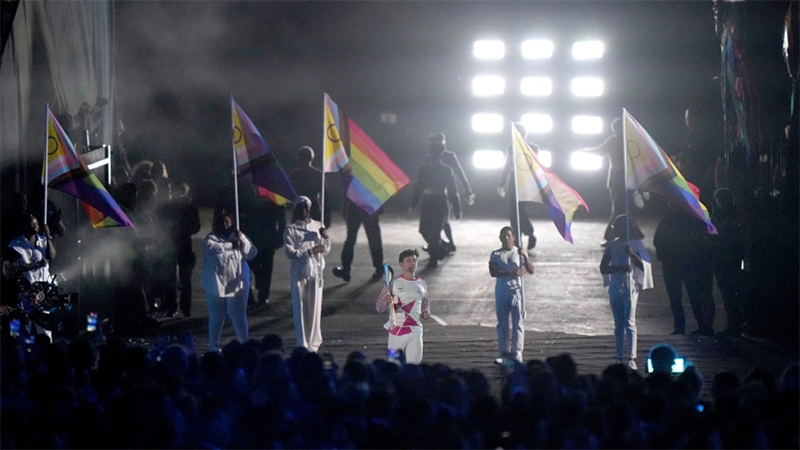 BIRMINGHAM, ENGLAND – Olympic gold medallist Tom Daley protested intolerance toward the LGBTQ2S+ community at the opening ceremony of the Commonwealth Games on Thursday.

The British diver, who is married to Oscar-winning director Dustin Lance Black, played a key role as one of the last bearers in the Queen’s Baton Relay.

The 28-year-old Daley entered Alexander Stadium surrounded by a group carrying Pride flags as part of a broader campaign regarding the toxic culture toward homosexuality held by more than half of the competing nations in the Games.

The two-time Commonwealth Games gold medallist did so with a broad smile, mindful the event is celebrating a theme of diversity and inclusion, though he also paid tribute to the six people who walked into the stadium carrying the Pride flags.

“In over half of the Commonwealth countries, homosexuality is still a crime and in 3 of those countries the maximum penalty is the death sentence,” Daley wrote on his Instagram account. “These laws are a legacy of colonialism. This opening ceremony for us is about showing LGBTQ+ visibility to the billion people watching…”

The Commonwealth Games is a multi-sport Olympic-style event made up of mostly former British colonies. Seventy-two countries and territories are represented.

Denise Lewis, an Olympic gold medallist from Birmingham, was the final baton bearer and handed it to Commonwealth Games Foundation president Louise Martin.

Canada, which is third all-time on the medal table and captured 20 medals four years ago in Australia, has 272 athletes competing. The Canadian team was led into the ceremony by flagbearers Josh Cassidy, a wheelchair racer, and Olympic weightlifting champion Maude Charron.

The opening ceremony was described as a love letter to Birmingham, its history and its vibrant, multi-cultural community, with 30,000 tickets sold for the occasion.

Prince Charles and Camilla, the Duchess of Cornwall, arrived at the stadium in an Aston Martin he bought in 1970.

The vehicle was a nod to a tribute that featured in the opening ceremony to the West Midlands’ automotive industry featuring cars forming the Union Flag.

Prince Charles read a message on behalf of his mother, Queen Elizabeth II, to open the competition, which will run over the next 11 days.

“My warmest thanks go to all those who have worked so hard to ensure the success of this particularly special sporting event and I wish each athlete and team every success,” he said on the Queen’s behalf.

Daley is not competing in Birmingham, and Commonwealth Games Federation chief executive Katie Sadleir said the organization was aware of his stand.

Daley will feature in a BBC documentary titled “Tom Daley: Illegal To Be Me,” scheduled to be released in August at the completion of the event in Birmingham.

“I’ve experienced homophobia all my life, competing in countries where it’s illegal to be me and where I don’t feel safe to leave the venue I’m competing in,” he told the BBC. “If I feel like that as a privileged man, I can’t imagine what day-to-day life is like for LGBTQ+ people around the commonwealth. We wanted it to be something that actually makes a difference.”

The LGBTQ2S+ community demonstrated in Birmingham on Thursday to greet the arrival of the Queen’s Baton at Aston Hall after a journey that began at Buckingham Palace in October 2021.

A massive global audience was expected to watch the opening ceremony, which has been planned by Steven Knight, the creator of hit Birmingham-based series Peaky Blinders.

More than 5,000 athletes have arrived in England for the competition and it has been reported that more than 1 million tickets have been sold.

The Progress Pride flag is on display throughout the city and organizers are promoting the inclusivity of the sixth edition of the Commonwealth Games held in England.

But Sadleir conceded there were limits to the action the Commonwealth Games Foundation is able to take when it comes to the intolerance towards the LGBTQ+ community of several participating nations.

“We can’t go in to change the rules in countries, but what we can do is create opportunities for people to discuss issues in a safe environment,” she said. “Whenever we’re given the opportunity to talk about our values, we do that.”