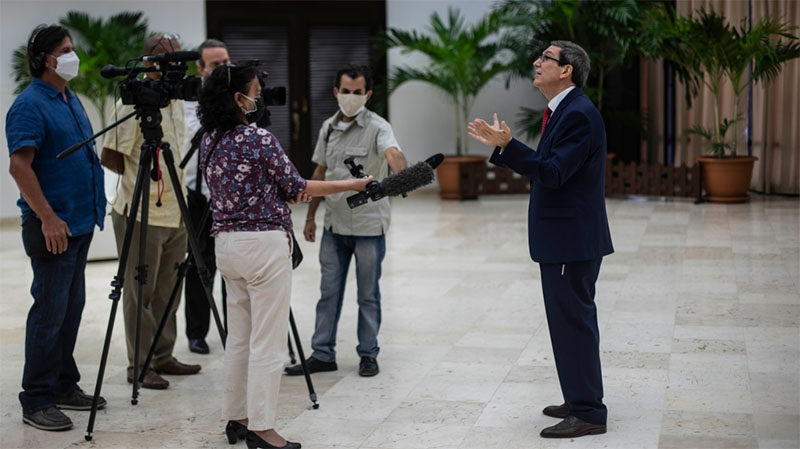 Cuba’s government said Wednesday that a decision to ban an opposition demonstration won’t hurt its image and accused the United States and anti-Castro groups in Florida of instigating next week’s planned.

“Reality is what determines image,” Cuban Foreign Minister Bruno Rodriguez told The Associated Press when asked about the protest that has been organized and discussed widely on social media.

The protest march scheduled for Monday would coincide with the reopening of the country after 20 months of lockdowns due to the coronavirus pandemic and with the 502nd anniversary of the founding of Havana.

“Social networks are a complicated terrain, where along with knowledge and truth, many lies and false news are spread,” Rodriguez said. “I’m sure that it won’t be possible to demonize or isolate Cuba internationally.”

The protest is being planned by Facebook’s Archipielago (Archipelago) initiative. Organizers asked for authorization to hold the march but were denied and are now urging people to take to the streets anyway.

The Foreign Ministry summoned hundreds of foreign diplomats to a meeting Wednesday and accused the U.S. government of instigating the protest as part of a plan to destabilize the country.

The socialist government is intent on preventing a repeat of the largest street protests in two decades that caught officials by surprise in July. They have blamed that unrest partly on U.S. economic sanctions and foes based in the U.S.

“In no way will we allow the permanent aggression of the United States … to generate conditions of internal subversion … to spoil the party,” Rodriguez told the diplomats.

As of Monday, Cuba will drop most restrictions on commercial flights, school attendance, transportation, restaurants and shops. Daily coronavirus cases have dropped dramatically in recent weeks thanks to a mass vaccination program.

Rodriguez called the planned protest an “operation” by the government and officials of the United States to do away with the Cuban system. He said U.S. sanctions on Cuba seek to suffocate the island, generating social protests and creating the image of a “failed state.”

No U.S. diplomats attended the meeting. The U.S. Embassy has been open since 2015, but operations were sharply reduced during the administration of U.S. President Donald Trump.

On Tuesday, State Department spokesman Ned Price tweeted: “A new generation joins Cuba’s human rights activists and implores their government to respect human rights. On November 15, the Cuban government can make the right choice – to listen to its people as they peacefully march for their voices to be heard.”

The Archipelago group is headed by playwright Yunior Garcia Aguilera, who has denied receiving financing or direction from outside Cuba. He said the march is meant to be peaceful and is to demand that authorities release people arrested on July 11 and 12 and grant more human rights.

Thousands of Cubans took to the streets in July protesting power outages, shortages, high prices and long lines and denouncing the government. The government has not said how many were detained, but some human rights groups said hundreds of people were either arrested or had gone missing after taking part.