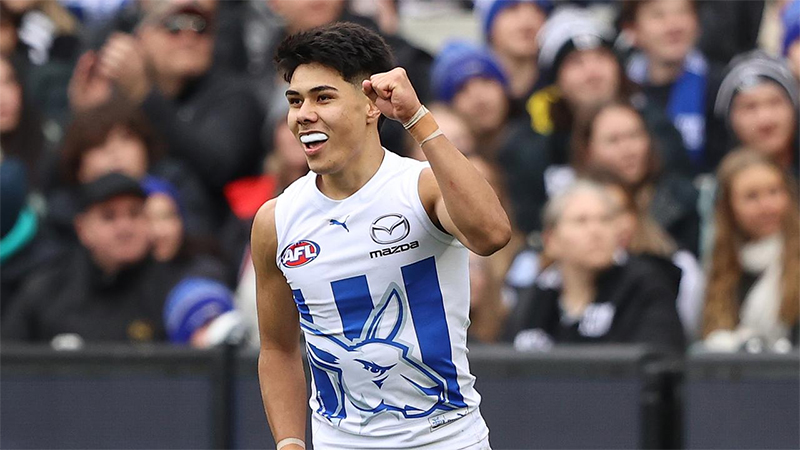 A Covid-19 outbreak is threatening to derail North Melbourne’s preparations for Sunday’s clash with Essendon at Marvel Stadium.

Adams is expected to be available to coach against the Bombers, while the playing quartet will be assessed late this week before a decision is made on their status.

All players and staff who travelled to Tasmania were asked to stay home on Monday and training will resume on Tuesday.

It is the second time inside a month that Essendon could benefit from a rival being understrength because of Covid after Brisbane lost five players ahead of the clubs’ round 17 match.

It is a blow to the last-placed Kangaroos’ hopes of finishing a difficult season on a positive note, with the in-form Bombers chasing a fifth win in their past seven matches.

A brilliant after-the-siren finish from Magpie Jamie Elliott barely denied Essendon another win at the weekend.

North’s recruiting team is keen to add more mature players to the list this off-season, particularly in the 24-to-28 age group, but the Roos could now get a chance to expose more of their list this week.

They also have a lengthy injury list, with Tristan Xerri, Jared Polec, Will Phillips and Miller Bergman ruled out for the season, but dual club champion Ben Cunnington (testicular cancer) has ramped up his training.

Making matters worse is that Flynn Perez has accepted a one-match ban for rough conduct against Hawks star Jaeger O’Meara.

The virus hit West Coast and Fremantle hard earlier in the year, while there have also been spot fires at various other clubs as the AFL warns about a challenging month or so ahead in that regard.

AFL players are no longer required to be fully vaccinated against Covid-19 but most teams are being more diligent in recent weeks as a safeguard against a North Melbourne-like situation.

‘Can you believe it?’: Scott Morrison goes missing