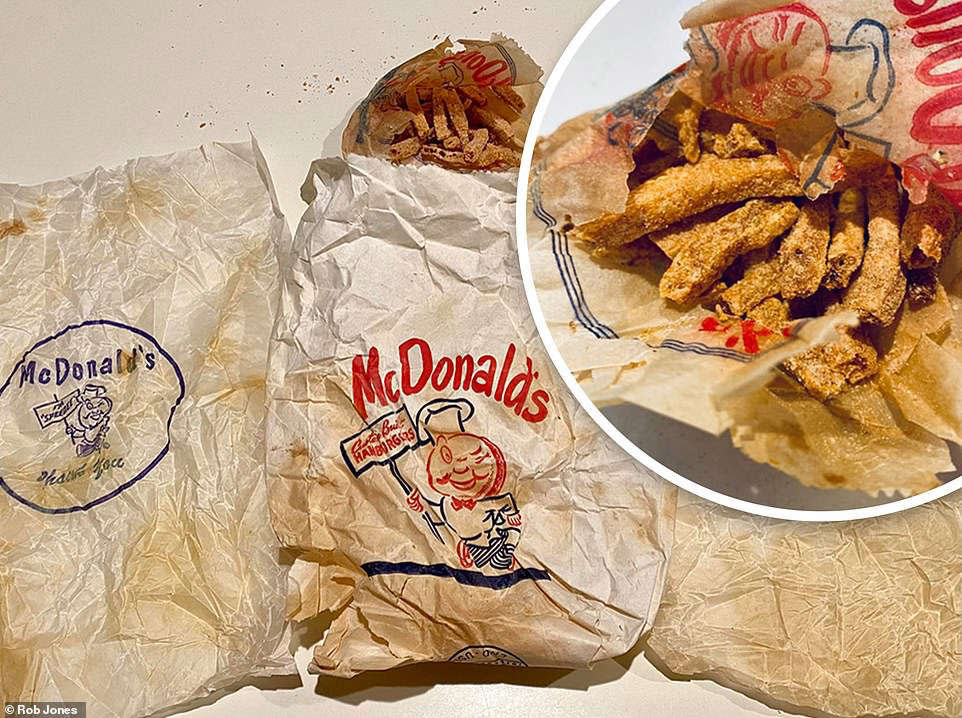 Rob and Grace Jones were renovating their home last month when they found a bundled-up towel in their bathroom wall.

“We were both like, ‘Oh, my gosh, we’re going to be unveiling a cold case here,'” Grace told NBC News. “I was shielding my kids in case there was any dried blood.”

To their immense relief, it wasn’t a body. Their discovery turned out to be a McDonald’s order that stood the test of time — a half-eaten order of french fries alongside two burger wrappers that appear to be from the late 1950s or early 1960s, suggesting the food sat there for decades.

“Not a cold case, just some cold fries,” Grace told NBC. “They were very well preserved.”

The burger packaging bears an image of Speedee, McDonald’s mascot before the now-iconic clown Ronald McDonald, and is soaked in grease in many parts. The fries, meanwhile, were crispy and brown.

“We saw the fries and were like, ‘This is unreal.’ How on Earth are these fries still in this bag and how are they preserved so well?! It was wild,” Grace told CNN.

Rob was removing a built-in toilet paper holder in the bathroom when he first spotted the cloth.

“We just kind of assume whoever was building the house probably went there for lunch, and it fell in there or they did it on purpose,” Rob told The Today Show.

For now, the couple is holding onto their decades-old treasure, but they’re open to selling it, they told CNN.

“We’d be happy to sell it or if not, we’d probably keep it as a cool piece of history,” Grace said.
Read the original article on Business Insider