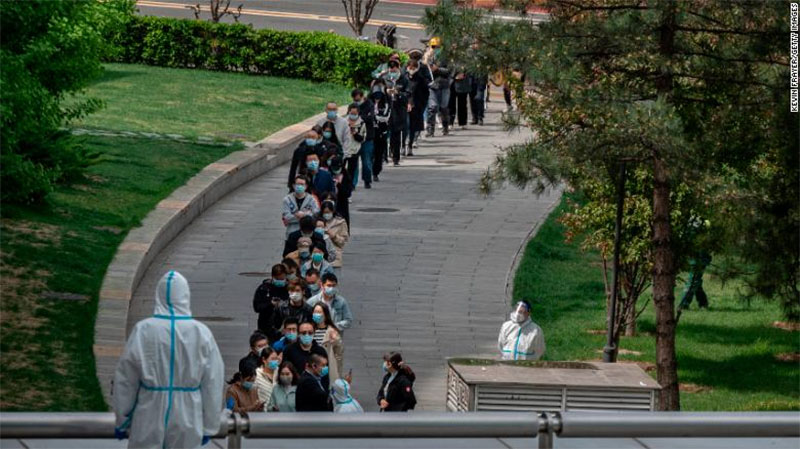 Beijing is partially locking down to control a Covid outbreak that could completely shutter the Chinese capital. But just as the government is tightening controls in the city — testing 21 million residents, shutting schools and some shopping malls — I’m trying to get in.

Flights from Tokyo to Beijing this week were impossible to find — the closest available flight was to Kunming, southern Yunnan province, around 1,600 miles (2,600 kilometers) away. There, I’ll spend 21 days in quarantine, and even then, there’s no guarantee I’ll be allowed into the Chinese capital.

China’s strategy of strict border controls, snap lockdowns, and mass testing worked in the early days of the pandemic to contain the spread of Covid-19, but the highly transmissible Omicron variant has posed a much harder challenge.

Since mid-December, China’s average daily case count has surged from double-digits to more than 20,000. At least 27 cities across the country are under full or partial lockdown, impacting around 180 million people, according to CNN’s calculations.

Some of the strictest measures are in force in the country’s financial powerhouse, Shanghai, where many of its 25 million residents have been sealed inside their residential compounds for more than a month, creating discontent that has flooded China’s heavily policed internet.

Government censors have been racing to keep up with a torrent of anger over food shortages, lack of medical access, and — for those who test positive — poor conditions at makeshift quarantine camps. Protests have even broken out — a rare sight in authoritarian China — and residents have clashed with the police.

The number of cases in Beijing remains low compared to Shanghai — 34 new cases were reported in the capital Friday, taking the total number of cases to 228 during this outbreak.

But China is taking no chances as it seeks to stop the virus from spreading inside its political hub.

Related Topics:AsiaChinazero-Covid measures
Up Next

Blasts cut power to millions in Afghanistan ahead of Eid