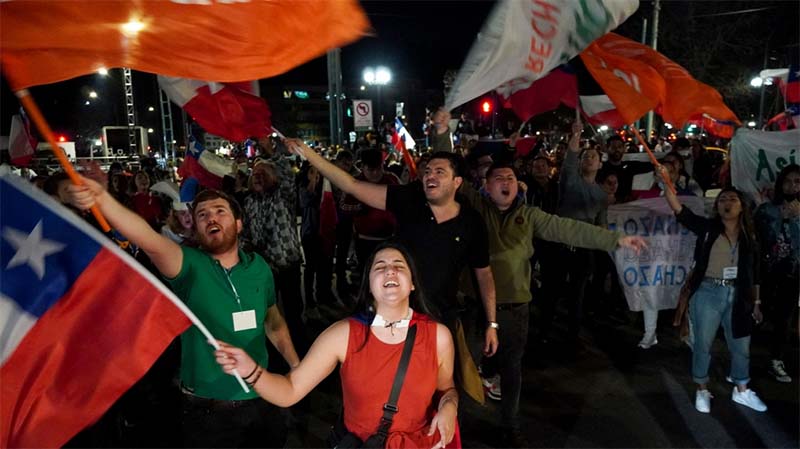 SANTIAGO, CHILE – Chileans overwhelmingly rejected a progressive new constitution to replace its dictatorship-era charter, dealing a blow to youthful President Gabriel Boric, who must now hammer out deals to create another proposal or change the current one.

Although rejection had been expected in Sunday’s plebiscite, the almost 24-point margin was a shocking repudiation of a document that was three years in the making and had been promoted as a democratic effort to replace the constitution imposed by Gen. Augusto Pinochet 41 years ago.

The constitution, written by a convention split equally between male and female delegates, characterized Chile as a plurinational state, established autonomous Indigenous territories and prioritized the environment and gender parity.

Boric, who had lobbied hard for the new constitution, said the results made it evident the Chilean people “were not satisfied with the constitutional proposal.”

The president said there would now likely be “adjustments to our governing team” as he seeks to find a path forward. Despite the loss, the large majority believe the current constitution needs changing; they just felt the proposed one was not a suitable replacement, analysts say.

Boric made clear the process to amend it would not end with Sunday’s vote. He said it was necessary for leaders to “work with more determination, more dialogue, more respect” to reach a new proposal “that unites us as a country.”

In Chile’s capital of Santiago, horns blared in celebration as people gathered in numerous intersections to celebrate the results.

“We’re happy because, really, we all want a new constitution, but one that is done right and this one didn’t fulfil the expectations of the majority,” said Lorena Cornejo, 34, while waving a Chilean flag. “Now we have to work for a new one that unites us, this one didn’t represent us and that was clear in the vote.”

Even some who were in favor of the proposed constitution put a positive spin on the defeat.

“Although it’s true that I wanted it to be approved, this is a new opportunity to reform everything that people didn’t agree with,” said Alain Olivares, 36. “We’re just going to have to wait longer to change the constitution.”

Carlos Salinas, a spokesman for the Citizens’ House for Rejection, said the majority of Chileans saw rejection as “a path of hope.”

Despite polls that foresaw the defeat, no analyst had predicted such a large margin for rejection of what would have been one of the most progressive constitutions in the world and would have fundamentally changed the South American country.

“The constitution that was written now leans too far to one side and does not have the vision of all Chileans,” Roberto Briones, 41, said after voting in Chile’s capital of Santiago. “We all want a new constitution, but it needs to have a better structure.”

But others had fervently hoped it would pass and wipe away strong vestiges of the dictatorship.

“We have to leave behind Pinochet’s constitution that only favored people with money,” said Italo Hernandez, 50, as he exited the polling station in the National Stadium in Chile’s capital. He said it was “very symbolic and very emotional” to be voting at a stadium that had been used as a detention and torture site during the military dictatorship.

Boric, 36 is Chile’s youngest-ever president and a former student protest leader. He had tied his fortunes so closely to the new document that analysts said it was likely some voters saw the plebiscite as a referendum on his government at a time when his approval ratings have been plunging since he took office in March.

What happens now amounts to a big question. Chilean political leaders of all stripes agree the constitution that dates from the country’s 1973-1990 dictatorship must change. The process chosen to write up a new proposal still has to be determined and will likely be the subject of hard-fought negotiations within the country’s political leadership.

Boric has called on the heads of all political parties for a meeting to determine the path forward.

The vote marked the climax of a process that began when the country once seen as a paragon of stability in the region exploded in student-led street protests in 2019. The unrest was sparked by a hike in public transportation prices, but it quickly expanded into broader demands for greater equality and more social protections.

The following year, just under 80% of Chileans voted in favor of changing the constitution. Then in 2021, they elected delegates to a constitutional convention.

The 388-article proposed charter, besides focusing on social issues and the environment, also introduced rights to free education, health care and housing. It would have established autonomous Indigenous territories and recognized a parallel justice system in those areas, although lawmakers would decide how far-reaching that would be.

In contrast, the current constitution is a market-friendly document that favors the private sector over the state in aspects like education, pensions and health care. It also makes no reference to the country’s Indigenous population, which makes up almost 13% of the population.

Attacker and his girlfriend ‘planned’ attempted hit on Argentina VP