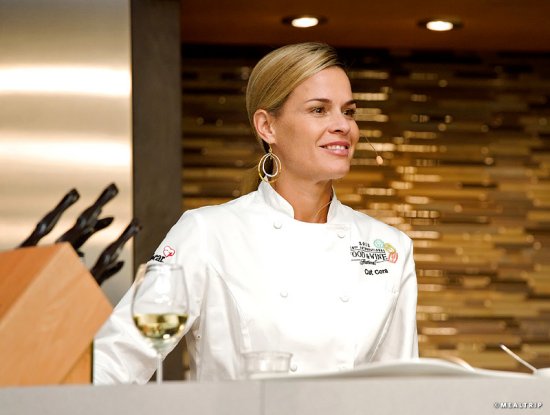 Celebrity chef Cat Cora filed a lawsuit against her own restaurant this month because it has damaged her reputation.

According to the lawsuit, the Iron Chef and Around the World in 80 Plates star partnered with Manhattan’s Fatbird Restaurant to allow the eatery to “use her name, image and likeness” in exchange for $400,000 and a 10 percent equity interest, DNA Info reported.

But Cora said the restaurant hasn’t made defaulted on payments and “repudiated its agreement to make future payments.”

That’s not all. The lawsuit also states that Fatbird Restaurant has been operating “in a substandard manner, but Cora has received the brunt of the blame for the restaurant’s lackluster performance, which has caused and continues to cause irreparable injury to Cora’s brand, good will and reputation as a world class chef and restaurateur.”

Cora’s attorney, Terrence A. Oved, told the New York Post that his client put “significant amount of time, effort, energy and expense on this project.”

“This suit seeks to recover for her what she was promised,” Oved said.

Fatbird currently has an average 3.5 star review on Yelp.

Although most reviews were positive, one reviewer said Fatbird’s ribs were, “like they took ribs, boil them for three minutes and put them in a box. Absolutely no flavor and tough as hell. I live two blocks from the place and will never ever go back.”