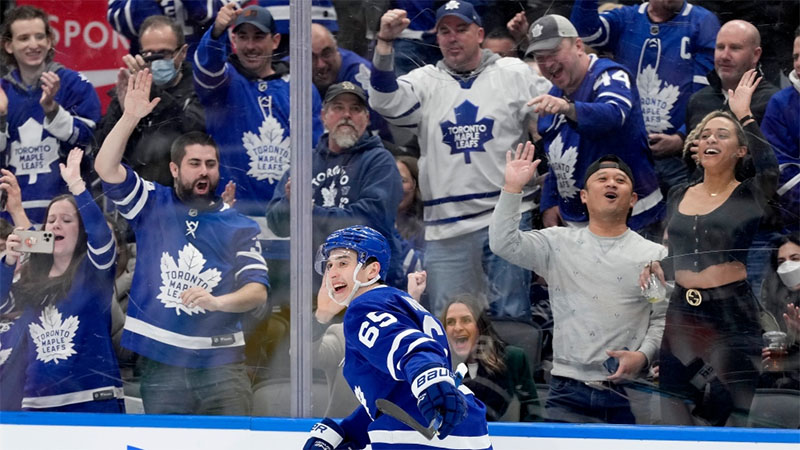 The Toronto Maple Leafs haven’t suited up for playoff game in front of more than a handful of fans in over 1,100 days.

The wait has been similar for the Calgary Flames.

The Edmonton Oilers, meanwhile, have gone nearly five years since their last playoff contest before a live crowd.

COVID-19 restrictions pushed the NHL behind closed doors and inside its 2020 post-season Toronto and Edmonton bubbles. Near-capacity arenas started to return south of the border in time for last season’s playoffs, but Canadian fans were mostly left to watch on TV as their teams battled in buildings that were either empty or close to it.

That will change next week when the Leafs, Oilers and Flames open the post-season in front of die-hard spectators no doubt eager to make up for lost time.

“The fans are going to be really into it,” Toronto star Auston Matthews said of getting back to packed buildings for the playoffs. “The atmosphere is going to be incredible.

“Something that we’re all looking forward to.”

Toronto’s last 12 post-season games — five in the bubble and seven during 2021’s first round against Montreal — were played before a grand total of 2,500 paying customers.

And that crowd was largely cheering for the other side last May at the cavernous Bell Centre as the Canadiens downed the Leafs in Game 6 before winning again two nights later at Scotiabank Arena — 550 fully vaccinated health-care workers were in attendance — to complete the comeback from a 3-1 series deficit.

Montreal made it all the way to the Stanley Cup final, beating the Vegas Golden Knights in the third round before eventually falling to the Tampa Bay Lightning, but never had a home crowd greater than 3,500 because of coronavirus measures.

Toronto’s last home playoff game at full capacity — also the last one in Canada — was April 21, 2019, when the Leafs missed an opportunity to close out Boston in Game 6. The Bruins would also win Game 7 back at TD Garden to eliminate their Original Six rival in the opening round for the second straight year.

“We certainly missed that over the last couple of series we’ve been in,” Leafs captain John Tavares said of fans. “No doubt that’ll be big.”

Toronto head coach Sheldon Keefe said it was strange to watch playoff games with rabid crowds in U.S. last season — and then play the next night in a rink devoid of atmosphere.

“You’re jealous,” he said. “The fans are such a massive part of what makes the playoffs what they are. The players know what’s at stake, and the play on the ice was still very competitive.

“But watching on TV you can feel the intensity and the emotion of the games through the crowd. That’s really what it’s about.”

“It was nice to see that we were still getting some attendance down there,” Leafs winger Wayne Simmonds added. “But at the same time, you don’t have the best feeling about what’s going on in your backyard.”

Calgary last suited up for a post-season game at Scotiabank Saddledome on April 19, 2019, in a 5-1 loss to the Colorado Avalanche that eliminated the Pacific Division champions in five games.

The Flames then played 10 times in the bubble before missing last season’s playoffs in the one-and-done North Division.

“Say whatever you want about the bubble,” said Calgary defenceman Rasmus Andersson. “But this feels more like real playoffs.”

The Oilers were on course to make the post-season in 2020 before the pandemic shuttered the league. Edmonton was then upset by Chicago in the bubble and swept by the Winnipeg Jets last May in front of swaths of empty seats.

Before that, the Oilers’ last playoff game at Rogers Place with fans came in 2017’s second round, when they beat the Anaheim Ducks 7-1 to force a Game 7.

“We’re excited to have them back,” Edmonton centre Ryan Nugent-Hopkins said. “The last two years have kind of been weird that way. Definitely excited to get that buzz back in the building. But also around the arena, in the grocery store and just that buzz around the city.

Keefe, who’s been on the job since the fall of 2019, has never coached an NHL playoff game with anywhere close to a packed rink.

He’ll finally get that chance next week.