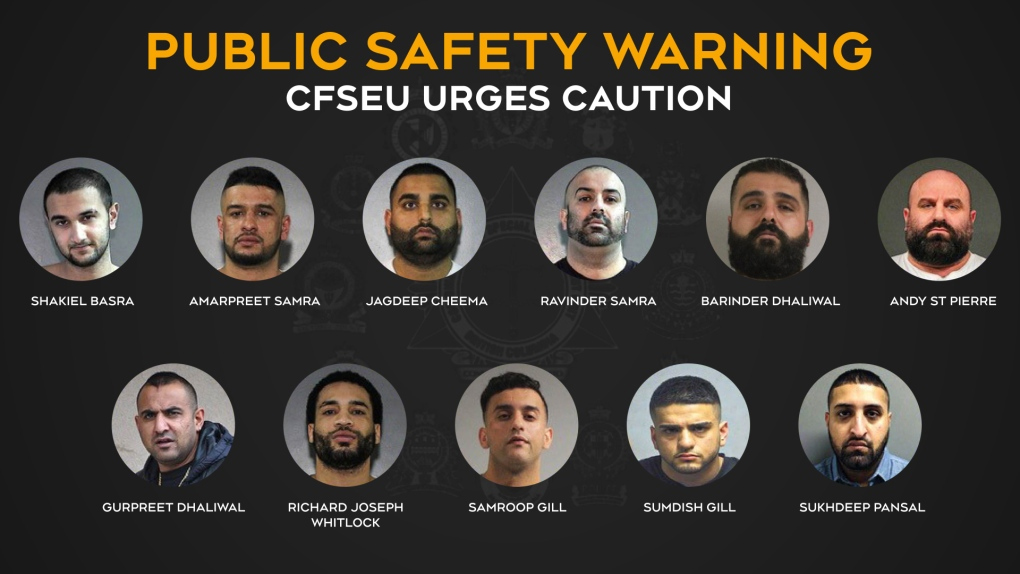 Police agencies in British Columbia held a joint news conference to identify 11 men they say are linked to a slew of killings and shootings in the province, warning the public to avoid being near them.

“It is highly likely a rival gangster will target them with violence,” said CFSEU Asst. Cmdr. Manny Mann, saying the men listed are a risk to their friends and family as well as bystanders.

“We want British Columbians to know their faces,” he said.

Mann went on to pledge to seize their property, including vehicles, in order to disrupt their alleged illegal activity.

The Vancouver police representative revealed that the province’s largest police department has been doing covert work to try and combat the problem, insisting they’ve invested considerable resources to do so and defending their tight-lipped approach to avoid going into details.

“I know this can be frustrating for the public when they hear about incidents of violence in their communities and feel unsafe,” said Deputy Chief Fiona Wilson.

She went on to outline several arrests made in co-ordination with other police agencies, some of which involved international co-operation.

“We are just as concerned and frustrated that we have to stand before you again to address a series of recent events related to the drug trade and gang violence,” said Asst. Comm. of the B.C. RCMP Will Ng. “I am asking for your support and assistance.”

He said since gangsters are moving across the Lower Mainland and other areas, working with various police agencies is critical.

Warnings to stay away from specific alleged criminals were once almost unheard-of, but they have been slowly increasing in recent years. This is the second one from the CFSEU in a little more than a year; the last one was prescient.

Meninder Dhaliwal, who was on last year’s 11-man list, was gunned down in Whistler late last month in a shooting that had tourists and visitors screaming and running from the violence. Police say his brother, Harpreet, was the man shot dead in Vancouver’s Coal Harbour neighbourhood last year.

Another brother, 35-year-old Gurpreet Dhaliwal, is on this year’s list.

WHAT TO DO? NO CLEAR ANSWER

Given that these men are under overt and covert police surveillance as investigators work to seize alleged proceeds of crime and evidence to convict them, CTV News asked what exactly police expect the public to do if they encounter such dangerous people.

Should a small business owner deny them service, for example? How should a neighbour, who’s unable to just pick up and move, respond? The answer is unclear, but police acknowledge isolating the men and making pariahs of them is part of their strategy.

“We want the public to know who they are,” answered Mann. “That’s very, very important so they can take all the steps necessary to ensure their own particular safety so they can stay away from them, distance themselves from them.”

Experts voice privacy concerns over RCMP’s use of ‘intrusive’ spyware

Evacuation order issued for B.C. resort village due to wildfire