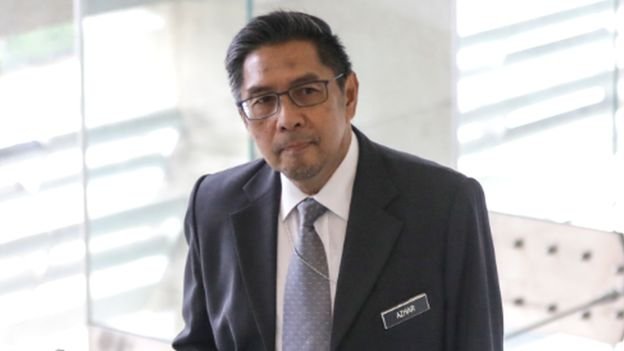 The passenger jet had been missing, the report said, for about 20 minutes before authorities sent an alert.

The aircraft mysteriously disappeared in 2014 with 239 people on board.

It was flying to Beijing from Kuala Lumpur and is believed to have plunged into the southern Indian Ocean.

An official search ended in May, although Malaysia’s new government has said it might resume the search if more credible evidence emerges.

Responding to the report’s findings on Tuesday, Mr Rahman said in a statement that it was “with regret and after much thought and contemplation” that he was resigning as chairman of the civil aviation authority of Malaysia.

The long-awaited official report into the disappearance of flight MH370 offered no new information on why the passenger aircraft vanished four years ago.

It said that while there was evidence of “unlawful interference by a third party”, meaning that the plane may have been manipulated off course, it was unclear who may have been responsible.

As well as finding failures with air traffic controllers to initiate standard emergency phases “in a timely manner”, the report also said:

Australian investigators have also previously rejected claims that the flight was deliberately brought down by the pilot.

Relatives of the missing passengers expressed disappointment on Monday that no conclusive explanation for the disappearance of their loved ones had yet been offered.

Flight MH370 disappeared after it stopped sending communications hours into its flight on 8 March 2014. No distress signal or message was sent.

The subsequent hunt formed one of the largest surface and underwater searches in aviation history.

The search for the plane eventually focused on a 120,000 sq km area of seabed about 2,000km off the coast of Perth in the southern Indian Ocean.

Although the underwater search turned up nothing, small pieces of debris from the plane were washed up on islands in the Indian Ocean and on the African coast.

Although Malaysian and Australian authorities have so far failed to find the aircraft, both have said the search could resume.

A private US firm began another search for the plane earlier this year but has yet to turn up any clues.