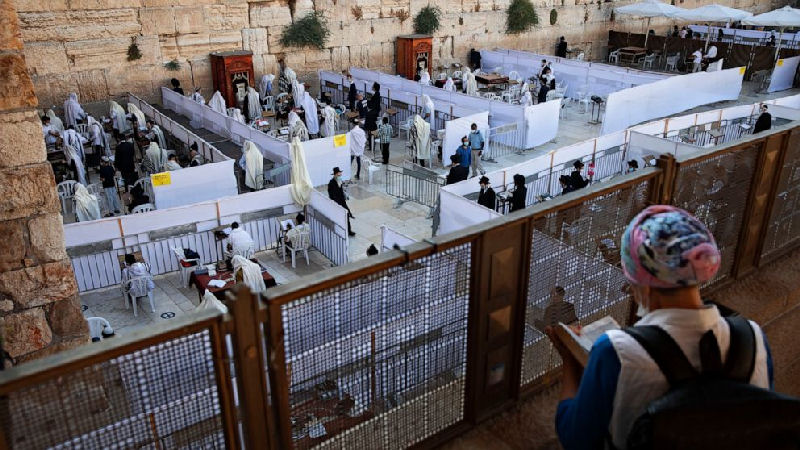 Adding to Prime Minister Benjamin Netanyahu’s troubles, a new economic bailout plan announced by the embattled premier came under tough criticism from some of the government’s top economic experts.

The growing coronavirus outbreak, coupled with a struggling economy, have marked a dramatic turnaround for Netanyahu. The Israeli leader received widespread praise for moving quickly to contain the coronavirus last spring.

But since lifting a series of restrictions in May, the country has experienced a surge in cases. With unemployment over 20 percent, the pandemic’s economic impact is generating domestic unrest and Netanyahu’s approval rating is plummeting.

The Health Ministry Thursday reported 1,898 new cases of the virus. The country has registered more than 44,500 total cases. At least 380 Israelis have died of COVID-19, the illness caused by the virus.

Netanyahu announced a plan Wednesday to give out hundreds of dollars in economic aid to every Israeli citizen to help the flagging economy as health officials warned the country could be headed toward a second general lockdown.

Whereas the initial virus outbreak was concentrated predominantly in the country’s ultra-Orthodox and Arab communities, whose populations often live in poorer, crowded conditions, the Health Ministry has warned that the disease is spreading more widely.

Netanyahu was to convene a meeting Thursday to discuss measures. Hezi Levi, the Health Ministry director general, told Army Radio that he would be pushing for more stringent movement restrictions, including a possible nationwide lockdown on weekends.

The prime minister’s economic stimulus proposal, which still requires government approval, would give single individuals one-time payments of just over $200, and families between $600 and $900 depending on how many children they have.

Netanyahu announced the grant a day after large protests outside his official residence calling for his resignation, and less than a week after thousands of self-employed Israelis staged a massive demonstration in central Tel Aviv. Tuesday night’s protest outside Netanyahu’s official residence in Occupied Jerusalem spilled over into violence and scores of protesters clashed with police.

Public approval of Netanyahu’s handling of the crisis has plummeted. A recent Midgam Research & Consulting poll published by Channel 12 last week found just 46 percent of respondents approved of Netanyahu’s job performance, down from 74 percent in May.

On Thursday, the aid package drew criticism from top economic experts. The head of the country’s central bank, Amir Yaron, said there were better ways to stimulate the economy. The Finance Ministry director, Keren Terner Eyal, said the Netanyahu administration was going ahead with the stimulus despite objections from the Treasury.

“The public does not need to receive the stipend,” she told Israel Radio. “The prime minister and finance minister are the ones who ultimately make the decisions. We implement the decisions of the elected officials.”

A government minister from the Blue and White party, Netanyahu’s rivals-turned-coalition partner, said she opposed the stimulus package in its current form. Strategic Affairs Minister Orit Farkash Hacohen told Israel’s Ynet news she would vote against the proposal “unless there are significant changes to the plan.”

“Throwing six billion shekels ($1.7 billion) on poor and rich alike, at those who need and those who don’t, is not an economic plan, it’s populism,” she said.