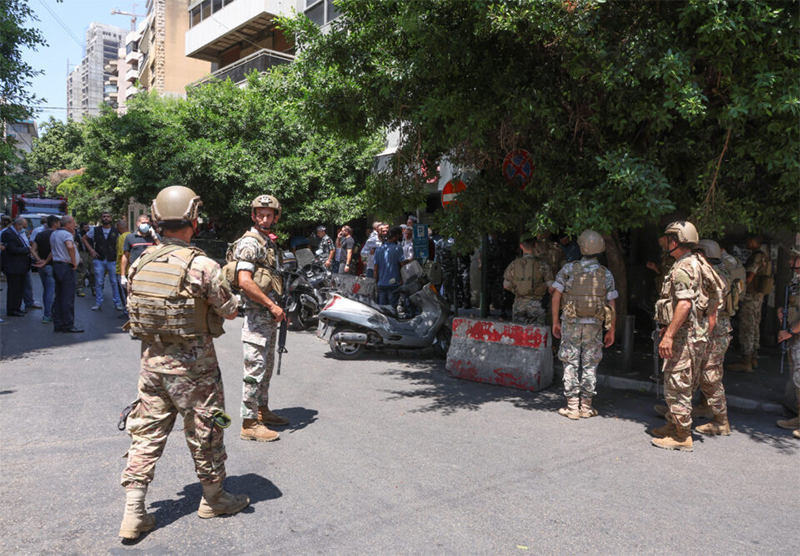 An armed man demanding deposits frozen by his bank took an unspecified number of hostages on Thursday at the Federal Bank of Lebanon, a security source said and a Reuters witness said.

Lebanese banks have limited withdrawals of hard currency for most depositors during the country’s three-year financial meltdown, which has left more than three-quarters of the population poor.

The man entered the Federal Bank of Lebanon branch in the Hamra neighborhood in west Beirut just before noon on Thursday with a firearm, the security source told Reuters.

Some customers in the bank managed to flee before he shut the doors on the rest, said the source, who was not able to specify how many clients or employees were in the branch.

A Reuters witness could see a bearded man in a black shirt behind the gated entrance to the bank speaking to several men in plain clothes on the outside.

“Let them give me back my money!” he was heard telling them.

According to AFP, security sources said the armed man was also threatening to set himself ablaze.

“He managed to get in with a hunting rifle and flammable material, and threatened employees to give him his savings,” a security source told AFP, requesting anonymity.

Another security source at the scene said a man in his forties “poured gasoline all over the bank, and closed the bank’s front door, holding employees hostage.”

The man “threatened to set himself on fire and to kill everyone in the branch, pointing his weapon in the bank manager’s face,” said Lebanon’s National News Agency (NNA).

A video circulating on social media showed two people negotiating with the armed man behind the bank’s iron door.

He replied angrily, wielding his rifle in one hand and a cigarette in the other.