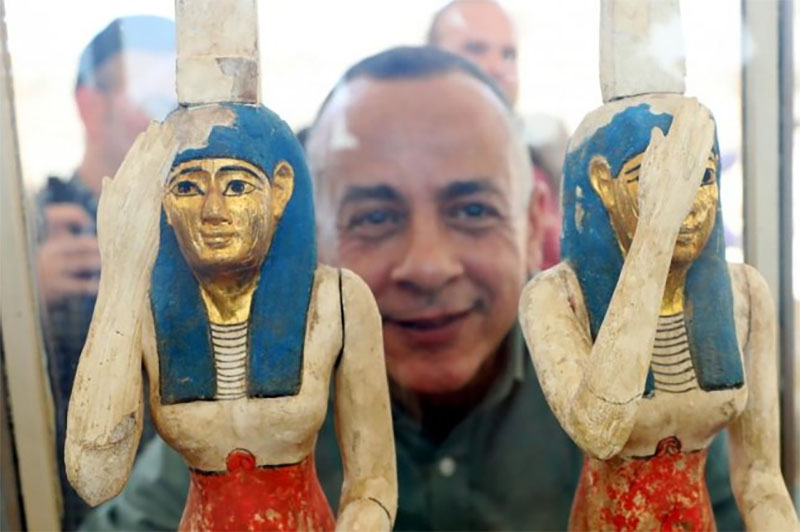 Egyptian officials announced on Monday that archaeologists have discovered roughly hundreds of artifacts at the Saqqara necropolis that date back about 2,500 years.

Officials said that about 250 sarcophagi and 150 small bronze statues of gods and goddesses were among the antiquities found at the site.

The Supreme Council of Antiquities displayed part of the findings, which included 35 of painted wooden coffins at the UNESCO Heritage site south of Cairo.

Archaeologists said they also found a collection of cosmetics, including combs, kohl eyeliners, bracelets, earrings, and necklaces, among other curios.

“I’m very proud that the discovery was made by Egyptians, and this will not be the last discovery here,” said Mostafa Waziri, secretary-general of Egypt’s Supreme Council of Antiquities, according to The National.

Cairo University researchers unearthed the tomb of Ptah-M-Wia, the treasurer of Pharaoh Ramesses II, last November. Ramesses was the powerful third pharaoh of the 19th Dynasty of Egypt.

When archaeologists started to excavate the site in 2018, researchers found the tomb of a priest that had been untouched for 4,400 years. The find was the subject of the 2020 Netflix documentary Secrets of the Saqqara Tomb.

Saqqara is a section of the wide-ranging ancient cemetery, known as a necropolis, for the Egyptian capital of Memphis, which includes the Giza pyramids.