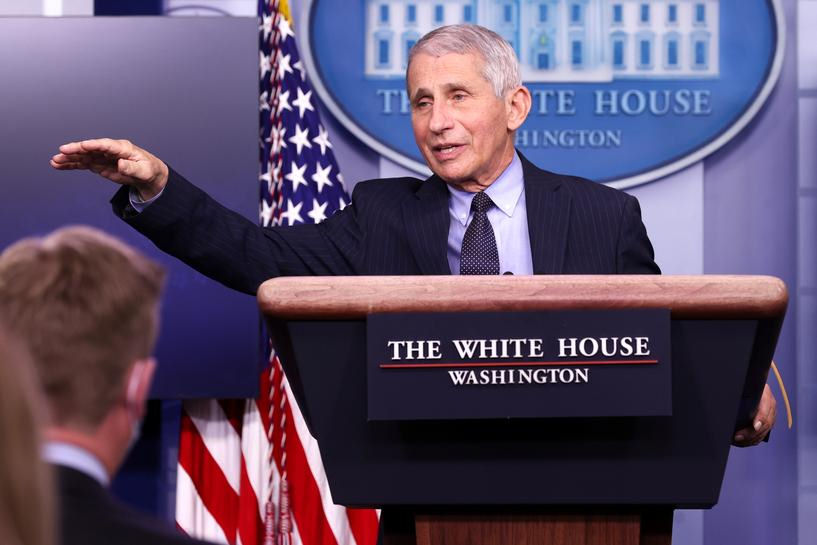 President Joe Biden unveiled sweeping measures to battle COVID-19 on his first full day in office on Thursday, with his chief medical adviser, Anthony Fauci, praising his new boss’ willingness to “let the science speak” in contrast to the Trump administration.

Biden said he was stepping up the federal response to the virus including by taking steps to expand testing and vaccinations and increase mask-wearing.

“This is a wartime undertaking,” the Democratic president said at a White House event where he signed executive orders to establish a COVID-19 testing board to ramp up testing, address supply shortfalls, establish protocols for international travelers and direct resources to hard-hit minority communities.

The pandemic has killed 405,000 people and infected more than 24 million in the United States, the highest numbers anywhere in the world.

Former President Donald Trump, who left office on Wednesday, often sought to play down the severity of the country’s worst public health crisis in a century and left much of the planning to individual states, resulting in a patchwork of policies across the country.

Fauci, who served under Trump but has been promoted to Biden’s chief medical adviser, was at Biden’s side during the event and then spoke to reporters in the White House briefing room for the first time in weeks, after Trump largely banished him from the podium.

Fauci said he was “uncomfortable” at times during the Trump administration. He did not mention the Republican former president by name, but referred to comments about the drug hydroxycloroquine, which Trump boosted as a treatment for COVID-19 before its efficacy had been proven, which Fauci said “were not based on scientific fact.”

“I take no pleasure at all in being in a situation of contradicting the president,” said Fauci, adding that he felt free under Biden to speak without “repercussions.”

“The idea that you can get up here and talk about what you know, what the evidence, what the science is, and know that’s it – let the science speak – it is somewhat of a liberating feeling,” he said.

“One of the new things in this administration is if you don’t have the answer, don’t guess. Just say you don’t know the answer,” Fauci added.

The United States was still in a “very serious situation” with the virus, but that seven-day averages suggested the infection rates were plateauing, he said.

If 70% to 80% of Americans are vaccinated by the end of summer, he added, the country could experience “a degree of normality” by the fall.

At the earlier event, Biden said the rollout of the vaccine in the United States had been a “dismal failure so far,” and disclosed a White House plan that increases the federal government’s role in the response.

Biden made a personal plea to all Americans to wear masks over the next 99 days to stop the spread of the virus.

Among other actions signed by Biden on Thursday was an order requiring mask-wearing in airports and on certain public transportation, including many trains, airplanes and intercity buses.

The administration will expand vaccine manufacturing and its power to purchase more vaccines by “fully leveraging contract authorities, including the Defense Production Act,” according to the plan.

The Trump administration had invoked the law, which grants the president broad authority to “expedite and expand the supply of resources from the U.S. industrial base” for protective gear, but never enacted it for testing or vaccine production.

The White House plan also has the United States taking a larger global role in tackling the pandemic, and Biden will direct government departments to support efforts to get vaccines to poorer countries.

The president has pledged to provide 100 million doses of the coronavirus vaccine during his first 100 days in office. His plan aims to increase vaccinations by opening up eligibility for more people such as teachers and grocery clerks.

As of Thursday morning, the U.S. Centers for Disease Control and Prevention said it had administered 17.5 million doses of COVID-19 vaccine out of some 38 million distributed.

Biden has put fighting the disease at the top of a daunting list of challenges, including rebuilding a ravaged economy and addressing racial injustice, and has proposed a $1.9 trillion COVID-19 package that would enhance jobless benefits and provide direct cash payments to households to alleviate the financial pain from the coronavirus.

The House of Representatives is planning to bring the bill to a vote the first week of February, Speaker Nancy Pelosi said on Thursday.