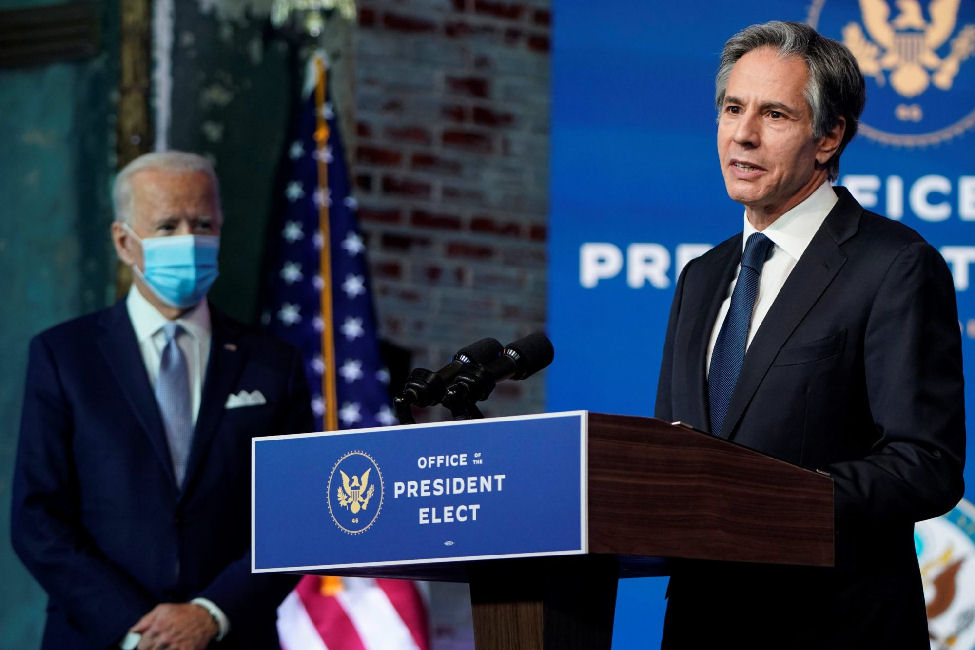 President-elect Joe Biden’s incoming secretary of state, Antony Blinken, is set to pledge on Tuesday that he will work to revitalize damaged American diplomacy and build a united front to counter the challenges posed by Russia, China and Iran.

In a speech a day before Democrat Biden takes over from Republican Donald Trump, whose four-year tenure was marked by unilateral American action that often upset allies, Blinken will pledge to act together with them and with humility.

Blinken, 58, a veteran foreign policy hand who is a close confidant of Biden, will also explain why U.S. leadership is vital for the world, while promising a foreign policy that will deliver for the American people.

“When we’re not engaged, when we don’t lead, then one of two things happen: either some other country tries to take our place, but probably not in a way that advances our interests or values. Or no one does, and then you get chaos,” Blinken will say, according to his prepared remarks to the Senate Foreign Relations Committee later on Tuesday.

“Either way, that does not serve the American people.”

His comments to the U.S. Congress will come two weeks after the building representing American democracy was stormed by thousands of members of a pro-Trump mob as they attempted to overturn Biden’s election victory.

The unprecedented attack stunned the world, further bruised America’s standing in it and gave ammunition to U.S. adversaries globally. Aware of the damage, Blinken is set to put frequent emphasis on humility in his speech. “Humility because we have a great deal of work to do at home to enhance our standing abroad,” he will say, according to his prepared remarks.

Biden will be taking on a much different world from the one he left four years ago as President Barack Obama’s vice president. China has assumed a larger global role, ranging from multilateral institutions to assisting development in Africa and Latin America. Ties between Washington and Beijing have sunk to their worst in decades, prompting Cold War comparisons.

Blinken’s remarks show that the incoming administration is aware of the changed nature of the challenge.

“We’ll engage the world not as it was, but as it is. A world of rising nationalism, receding democracy, growing rivalry with China, Russia, and other authoritarian states, mounting threats to a stable and open international system, and a technological revolution that is reshaping every aspect of our lives, especially in cyberspace,” Blinken will say.