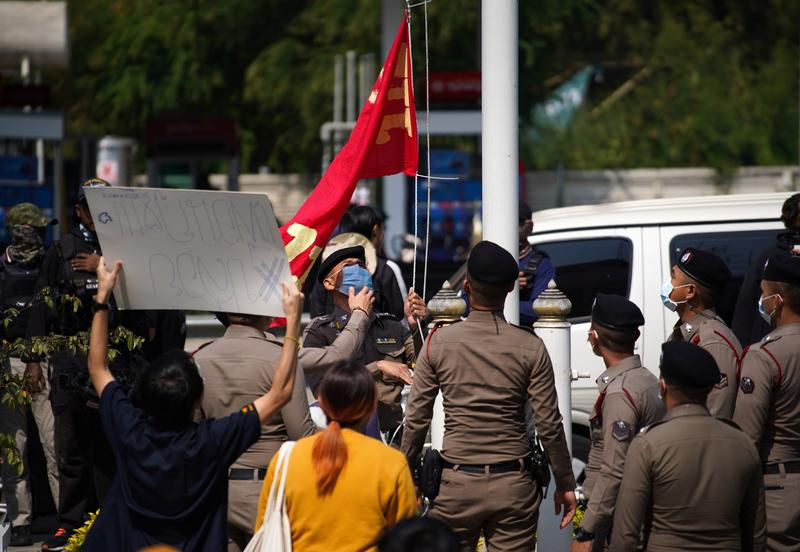 Scores of Thai protesters briefly scuffled with police on Friday, saying they feared another student activist would be charged with insulting Thailand’s king.

But police and the lawyer for activist Chaiyapon Danothai said he did not face lese majeste charges, which have been brought against at least 40 protesters since November and can mean a 15-year jail term if found guilty.

Protesters pushed and shoved about a dozen officers at a police station near Bangkok, where they believed Chaiyapon was going to be charged.

“There are no charges or arrest against him,” head of Khlong Luang police station, Sethanat Timwat, told reporters.

He said Chaiyapon’s name had appeared on a search warrant used during the arrest late on Wednesday of another activist, who is accused of defacing a portrait of King Maha Vajiralongkorn.

Chaiyapon was not in Bangkok when that incident took place, Noraset said.

The demonstrators brought goats to the police station, which they said symbolized Chaiyapon being made a scapegoat.

Months of youth-led protests against the military-backed government subsided at the end of last year, but the movement has vowed to continue its campaign.

The protests broke longstanding taboos by calling for reforms of the monarchy, which led to the use of the royal insult law for the first time in more than a year.

A government spokesman last week said its use was necessary.

Prime Minister Prayuth Chan-ocha had last year said that the king had asked the government not to charge anyone with lese majeste, but as protests escalated he said “all laws” would be used.