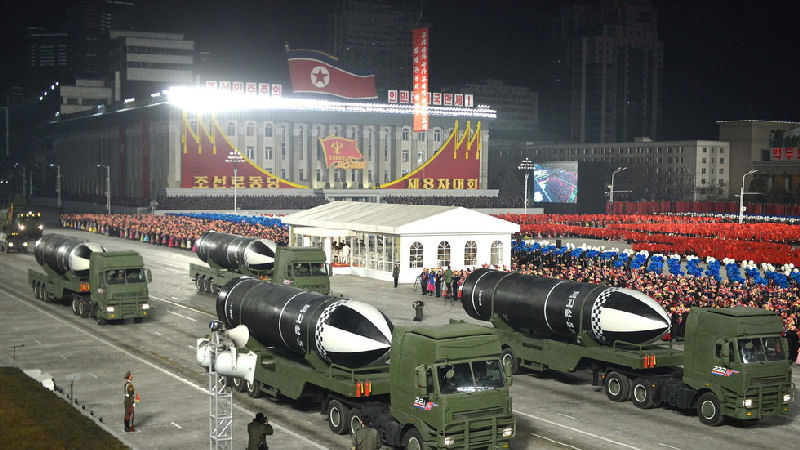 5.5kViews
1272 Shares
Scores of military hardware, including what is said to be a new version of North Korea’s submarine-launched ballistic missile, touted as the world’s most potent, were shown off in a grandiose military parade in Pyongyang.

An assortment of troops and some of the reclusive country’s most advanced military hardware were flaunted by Pyongyang on Thursday to mark the conclusion of the North Korea’s Workers’ Party congress – its first since 2016.

The supposedly new SLBM, the Pukguksong-5 – believed to be an improvement over another sea-based system, Pukguksong-4, was presented just three months ago at the October military parade.

Extolling the perceived virtues of its state-of-the-art weapon, North Korea’s KCNA news agency described it as “the world’s most powerful,” demonstrating “the might of the revolutionary armed forces.”

North Korean leader Kim Jong-un, who was promoted to the post of general secretary at the congress, the title his late father Kim Jong-il once held, oversaw the parade from a position surrounded by top military officials. Photos distributed by KCNA show a beaming Kim greeting the troops as they march.

While not likely related to the looming changing of the guard in the White House, the show of force by North Korea comes less than a week before Joe Biden is set to take the reins from outgoing US President Donald Trump.

The budding thaw in relations between Pyongyang and Washington in the early years of the Trump administration, which culminated in the 2018 Singapore summit, did not produce tangible results. Negotiations stalled after the US refused to consider any sanctions relief until Pyongyang gets rid of all its nukes.

Since the breakdown in nuclear talks, North Korea has taken an increasingly hostile tone towards the US. Speaking at the congress, Kim said that no matter who is president, the US will remain North Korea’s “biggest enemy,” arguing that “the true nature of the US and its fundamental policies” towards Pyongyang “will never change.”