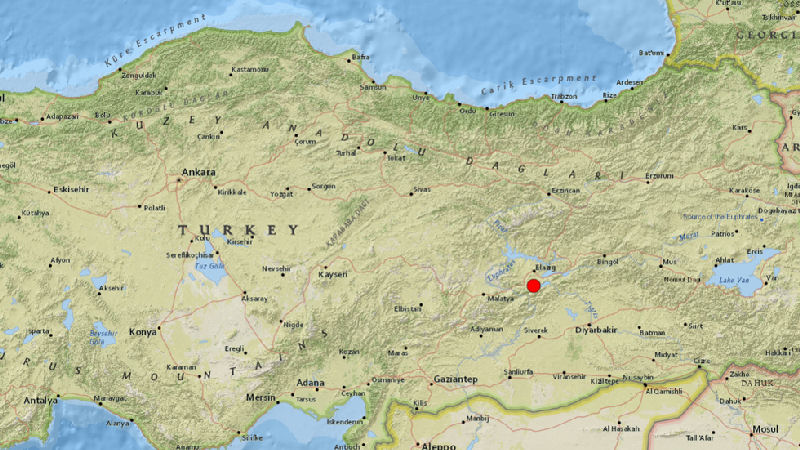 7.6kViews
1208 Shares
A powerful earthquake, measuring some 5.5 in magnitude, has rocked Turkey’s eastern province of Elazig. The location had already been devastated by a mighty jolt early this year, with at least 41 killed and over 1,500 injured.

The earthquake shook eastern Turkey early on Sunday. According to the US Geological Survey (USGS), the tremor measured 5.5 in magnitude, its epicenter being just 10 km below the surface.

The European Mediterranean Seismological Centre (EMSC) deemed the earthquake to be even more shallow, detecting its epicenter just two kilometers below.

According to local media reports, the jolt was also felt across other eastern provinces in the country.

So far, no damage or casualties have been reported. Turkish authorities said they are assessing the situation.

“There is nothing negative so far. All our teams continue their examinations on the ground,” Interior Minister Suleyman Soylu said on Twitter.

Turkey has been plagued by powerful earthquakes lately, enduring several devastating seismic events throughout this year. Late in January, Elazig was hit by a mighty 6.8-magnitude jolt, which flattened multiple buildings and left at least 41 people dead. Over 1,500 more received various injuries.

In October, western parts of Turkey experienced a powerful earthquake as well. A 7.0-magntude jolt occurred outside of Izmir, the country’s third largest city, collapsing multi-story buildings. Neighboring Greece was battered by the quake as well, with some 30 people killed and over 800 injured across the two countries.