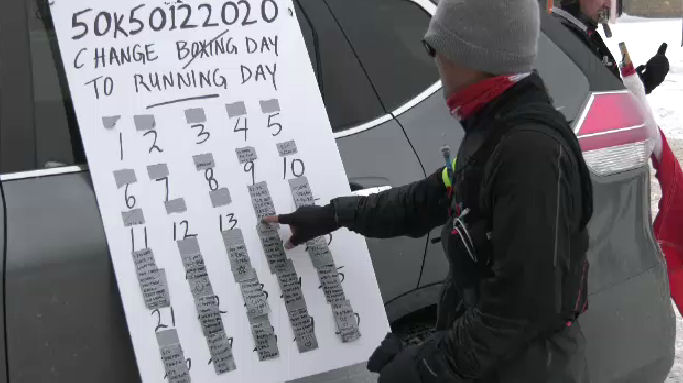 A Winnipeg long-distance runner is completing his 50th marathon of 2020.

Inspired by his 50th birthday, Junel Malapad decided to take on the challenge of running 50 kilometres 50 times over the course of the year.

He decided to cap off the monumental challenge with a 100 kilometre run around the Canadian Museum of Human Rights and St. Boniface on Boxing Day.

“Running is something people can embrace,” he said. “I started running because of health conditions in my family, and I wanted to nip that in the bud and be able to live a long life.”

Malapad is no stranger to running on Boxing Day. For many years he’s toted the expression “change Boxing Day to Running Day,” encouraging Winnipeggers to get out and be active.

“Today’s Boxing Day,” said Malapad. “I don’t like shopping, so this is the sixth year I’ve run on Boxing Day.”

In past years, he’s been able to run with other people on “Running Day,” but the pandemic has forced him to run by himself. But even though he’s running alone, Malapad is still encouraging people to get out of their houses and get some activity.

“I’m asking people to use running day any way they want,” Malapad said, “To leverage the day, to find ways to help to help their community, help themselves, help others and find a way to get out and have some normalcy.”

During Malapad’s year of running, he’s picked twelve charity organizations, one each month, to raise awareness and funds for.

“I’ve used the encouragement and inspiration to run by helping out twelve organizations,” said Malapad

December’s charity is Siloam Mission, an organization that helps with poverty and homelessness.

Malapad started his last run of 2020 around noon on Boxing Day.